Windows update, a Microsoft service used to provide updates that include pack and patched for Windows operating system and other software designed by Microsoft. It is also used to update drivers for other conspicuous hardware devices. However, the convenience and reliability of such an update came under a lot of scrutiny and backlash, when instead of smoothing the services it hindered the entire process.

Of late, Windows Update got stuck at “15019 initializing updates” for quite sometimes troubling the users and furthering the nuisance instead of toning it down.

Many users are facing serious trouble installing this build, due to error 0xC1900401 or an “Initializing update” hung. Many of them are facing a more serious issue during downloading and installing Windows 10 Build 15019 (from build 15014). 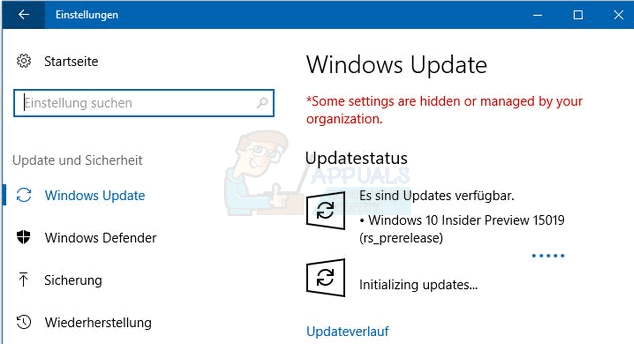 There can be plenty reasons why “15019&#160;”initializing updates” pop up now and then. It seems that there are some issues in Windows 10 preventing an administrator to terminate Windows Update service via service manager or via an administrative console.

However, there are ways via which such situation can be maneuvered to reach the proposed Windows Update.

There are scenarios wherein it helps to reboot the device and tries again to stop window update service.

Though the process might seem a bit time-consuming; it has worked for a lot of users after a multiple number of attempts.

Method 2: Pursue a Workaround for the error

Giving the PC a fresh start and providing an insider push mostly helps the update. Try the easiest method if the rebooting one seems a bit of a hassle.

For information- PowerShell is an object-oriented programming language and interactive command line shell for Microsoft Windows. The idea behind it is to automate the system tasks like batch processing and create systems management tools for commonly implemented processes.

By far, it has been the most effective way to kick-start your update and has worked for a lot of users, for whom the other methods have failed.

This article is a revised version of Upgrade Error 0xC1900401 and build is not yet available on Windows 10.