Some users report getting frequent BSOD (Blue Screen of Death) crashes when using Google Chrome or another web browser. By looking at the crash dump, some users have managed to discover that the crash dump points towards a problem with netwtw04.sys (C:\ WINDOWS\ system32\ drivers\ Netwtw04.sys). Most of the time, the BSOD is accompanied by the Stop Code: Driver IRQL NOT LESS OR EQUAL. 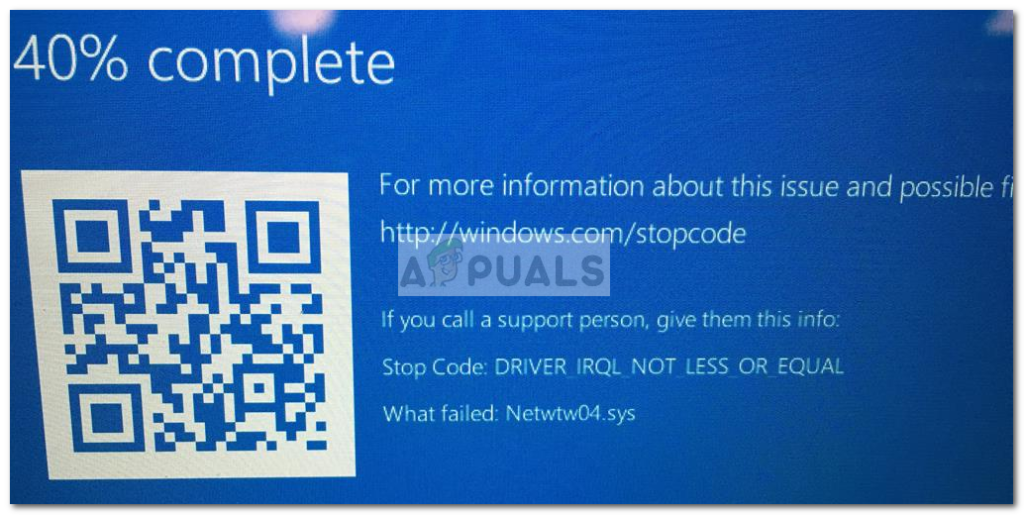 Upon investigating the issue, it seems like this particular BSOD crash is indicative of an improper driver that is currently installed on your device. Most affected users point towards the Wireless-AC 7265 Wifi adaptor driver and Intel Dual Band Wireless AC 8260 as the most common culprits for this issue.

If you’re currently getting constant BSOD crashes pointing towards Netwtw04.sys, the following methods might help. Other users in a similar situation have managed to resolve the issues using a series of fixes. Please follow each of the methods below in order until you encounter a fix that stops the BSOD crashes caused by Netwtw04.sys from happening. Let’s begin!

Note: If you are overclocking anything, revert to the default clocking values to ensure the crash is not caused by a hardware component.

Method 1: Rolling back the Wireless Driver

Most users have managed to get the BSOD crashes to stop by rolling back their wireless driver. The exact model might vary from computer to computer, but Wireless-AC 7265 Wifi, AC 8260 WLAN (version 19.0.0.9) and Intel Dual Band Wireless AC are the most popular occurrences that might crash your system.

This method was usually effective for uses that have begun experiencing BSOD crashes caused by Netwtw04.sys after updating the Wireless driver to a newer version. In their case, reverting back to the previous driver made the BSOD crashes to stop. Here’s a quick guide on rolling back your Wireless driver:

If the crashes caused by Netwtw04.sys return, move over to Method 2.

If rolling back the driver to a previous version is not an option, you can also try downloading a lower version of the wireless driver and install it on your system.

Unless you use a dedicated Wireless driver, Netwtw04.sys belongs to Intel(R) Dual Band Wireless-AC 8260, so the driver that you need to download can be found in Intel’s Download Center. But before we install the driver, you need to uninstall the current driver that is acting up and causing the BSOD crashes.

Note: This is effective for those users that don’t have the option to roll back the driver from Device Manager.

If you’re still experiencing BSOD crashes caused by the Netwtw04.sys, continue with the method below.

As a number of users have reported on Intel’s community forums, BSOD crashes pointing towards Netwtw04.sys can also occur due to an incompatibility between Raven CPU and Intel’s Wi-Fi drivers. Fortunately, AsRock released an update patch that fixes this incompatibility on most of their models.

Note: Keep in mind that updating the BIOS is not a conventional operation and has the potential of damaging your machine if done incorrectly. If you are determined to go through with this operation, please read the official documentation (here) carefully and follow the instructions to the letter.

Fix: Blue Screen of Death due to netwtw04.sys