The Debian-based Deepin Linux distro has just been updated to Deepin 15.7, which falls under the project’s new versioning scheme. Among its features are a smaller ISO footprint, laptop power optimizations which should yield a 20% longer standby time, support for NVIDIA PRIME, lower memory consumption, and just overall bug fixes and improvements to the distro.

There’s a lot of improvements to be found in this release, including a rebuilt network plugin, optimized system volume, an optimized switching effect between desktops, and updates to Google Chrome and Firefox Quantum (ZH). 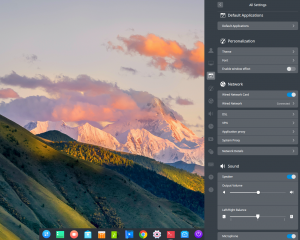 deepin (formerly, Deepin, Linux Deepin, Hiweed GNU/Linux) is a Debian-based distribution (it was Ubuntu-based until version 15 released in late 2015) that aims to provide an elegant, user-friendly and reliable operating system. It does not only include the best the open source world has to offer, but it has also created its own desktop environment called DDE or Deepin Desktop Environment which is based on the Qt 5 toolkit. Deepin focuses much of its attention on intuitive design.

Its home-grown applications, like Deepin Software Centre, DMusic and DPlayer are tailored to the average user. Being easy to install and use, deepin can be a good Windows alternative for office and home use.

Therefore, deepin 15.7 will be the first version to focus on system optimization and stability fixes under this rule. Additionally, deepin 15.7 fully synchronizes the latest repository components of upstream Debian, so if you upgrade from an earlier version (including 15.6) to 15.7, you will receive more than 1G updates. This process, depending on your Internet bandwidth, may be as short as 10 minutes and as long as hours. Please wait patiently for the full upgrade, do not shut down or unplug the power during the process, otherwise you may not be able to enter the system.

The summary changelog is as follows: