There have been a couple of Limited Edition PS4 variants ever since the original PS4 came out and here we have another one. This one is a dark Blue Limited Edition PS4 that is coming out for the “Days of play” promotion that will be taking place starting the 8th of June and will end on the 18th of June. In these 10 days, you will get discounts on consoles, hardware and games.

Update: The pricing is indeed regional and the included video features the price cuts. We have also included different promotions in the updated article below.

The dark Blue Limited Edition PS4 will only be available in limited numbers and so you can expect it to be priced higher as compared to the regular PS4 slim. The console is priced at 2399 Yuan, which is roughly 373.68 US Dollars. This information comes from a Chinese source so it is possible that the promotion is specific to China, but that seems highly unlikely. 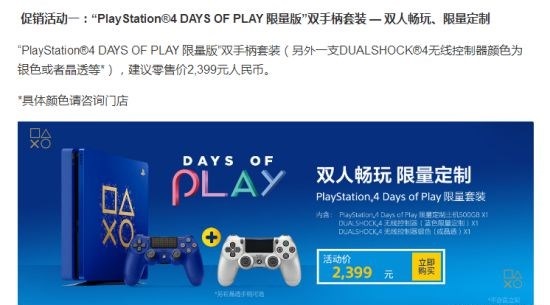 The deals are in a different language, which makes it hard to figure out what they actually are but it is safe to assume that there will be promotions across the board, including not only the dark Blue Limited Edition PS4, but the regular PS4 slim, the PS4 Pro as well as discounts on PSVR, PSVR games and other promotions. 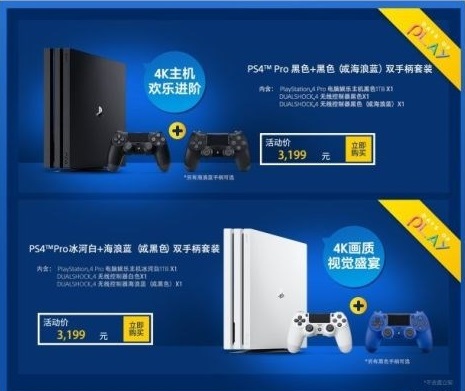 This pricing is in Yuan which might seem a bit off when converted to USD, but it is possible that these are regional prices and that prices will be different depending on where you live. We have still included images of the discounts in order to give you an idea of what you can expect to see.

If you were in the market for a new PS4 or wanted to get some new games then you might want to hold off a but. June 8th is only a few days away and it is possible that you might be able to take advantage of some killer promotional offers which will save you some money. Stay tuned for more information regarding the matter.

Let us know what you think about the Dark Blue Limited Edition PS4 and whether or not you are interested in getting one of these limited edition consoles for your collection.