You may have seen conhost.exe appear in the Windows Task Manager and wondering what it is. Those running graphics intensive application or with NVIDIA graphics may have also notice several conhost instances. In this article, we’ll shed more light on this process really is, why you see several instances and what it has to do with Windows.

First of all, conhost fully stands for Console Window Host. Let’s do a little history. Back in Windows XP, the Command Prompt was handled by a similar process called the Client Server Runtime System Service (CSRSS). At that time, CSRSS could crash and take the whole system down with it, and also did not allow developers to run themed code in a system processes.

In Windows Vista, the Desktop Window Manager (DWM) was introduced. This service drawed composite views on desktop instead of letting every application handle it’s own. This gave the Command Prompt an extent of theming similar to other Windows. The dwm service handled only the title bars and frame, leaving other components, hence the old scroll bars.

From Windows 7, we saw the Console Window Host (conhost.exe). As the name already suggests, it is a host process for the console window. Conhost.exe serves as an interface between the CSRSS and the Windows Command Prompt, allowing windows to fix previous issues like theming the entire cmd prompt window and allowing drag and drop into the command prompt. Conhost.exe has lived though to Windows 10, creating room for all the new interface elements and styles that have been introduced to Windows.

So, the Console Window Host is more of a shell that takes charge of the running of a system service like CSRSS, while being able to grant the ability to make use of modern user interface elements.

Why There Are Several Instances Of Conhost.Exe

It’s common to see multiple instances of conhost.exe running in the Task Manager. These instances take very little CPU or RAM resources. If however, you’ve noticed a continual excessive CPU or RAM usage, you should look deeper into the issue and determine what specific applications are involved. You can download Microsoft’s Process Explorer and run it to gain more insight to what the issue could be. This article gives you more details on how Process Explorer works.

If you’re wondering whether conhost.exe is a malware, it is not but an essential Windows component. But it’s possible a virus can replace the real Console Window Host with it’s own process, which you can easily fish out by right-clicking on an instance of the Console Window Host and clicking Open file location. 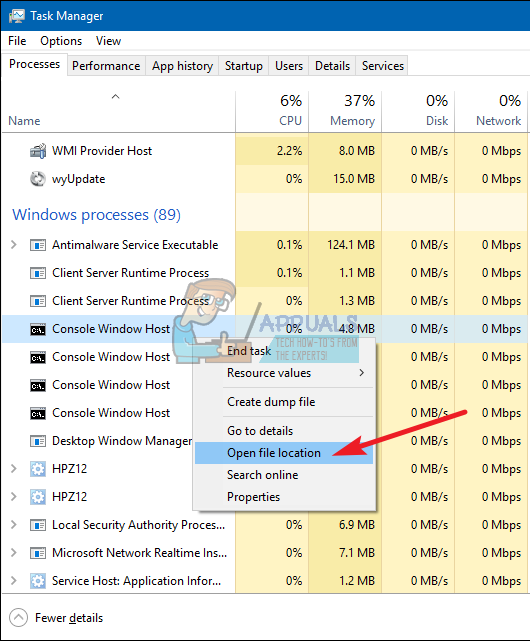 If the file is location in Windows\System32, then you can be certain in it’s not a virus. It the file location is somewhere else, say %userprofile%\AppData\Roaming\Microsoft, then you may be dealing with a virus. There are certain malwares which masquerade as conhost.exe and perform various functions. A better alternative is for you to install an antivirus like Malwarebytes and run a complete malware scan on your PC.

What is conhost.exe and is it related to NVIDIA?