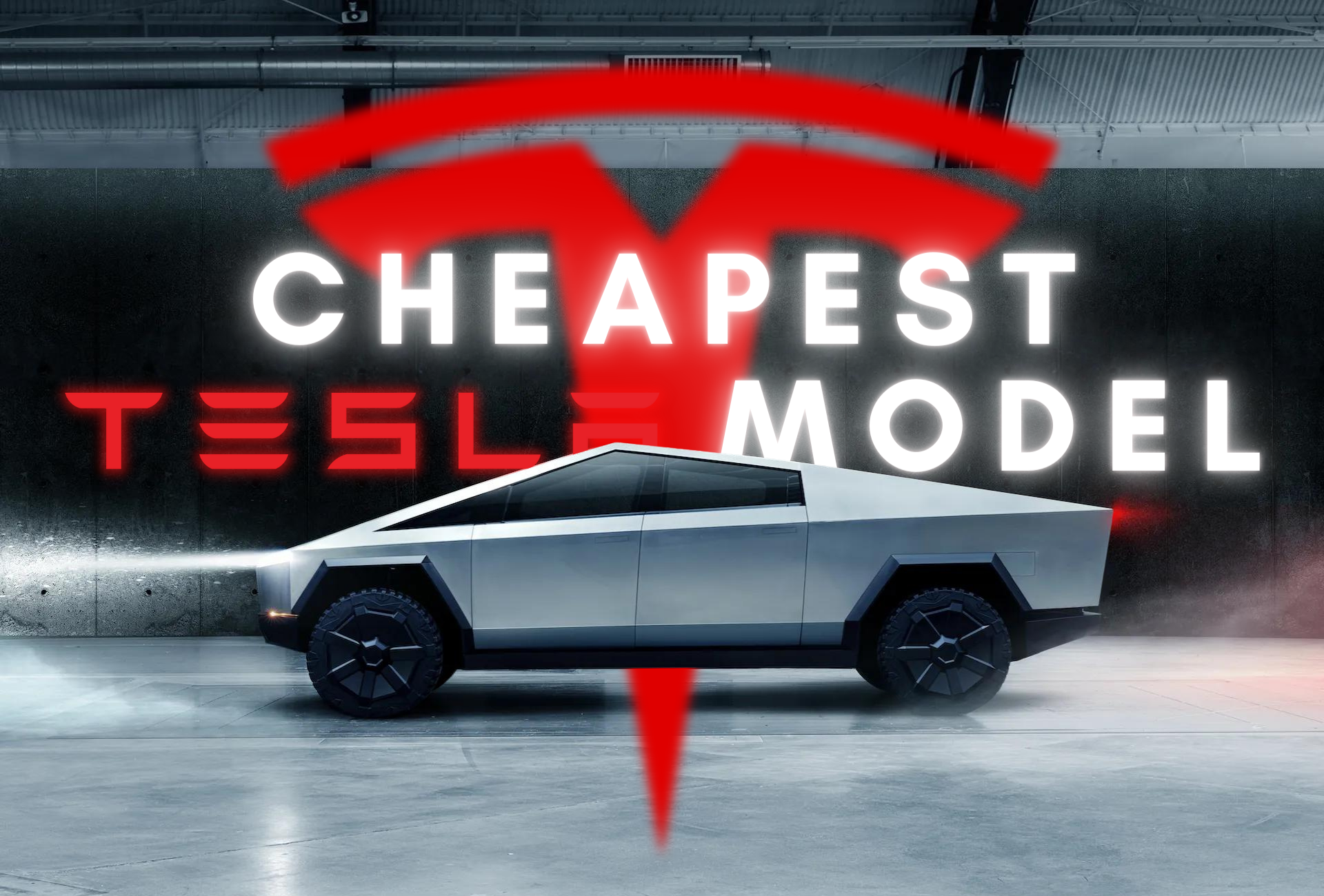 Over the past decade, a singular electric-vehicle company, Tesla, has emerged as the industry leader. Tesla is a pioneer in the EV market. Even with more competitors than ever before, Tesla manages to maintain a healthy gap with its market share.

Unfortunately, anyone looking to purchase a Tesla may find that certain models are out of their price range. The company does make more affordable cars for everyday folk, these exist to cater to a larger market where traditional gas-combustion vehicles still roar supreme. Some models are priced more fairly than others, and it’s all about the options at the end of the day; so:

What is the cheapest Tesla Model?

The Model 3 Standard Range has the lowest price tag of any Tesla at $46,990 before any discounts or incentives are applied. However, the cost can very quickly rise to over $60,000 when options like improved wheels, Full Self-Driving ($15,000), and other interior/exterior modifications are added.

The Plaid Model S sedan is Tesla’s priciest offering, with a starting price of $135,990 and a maximum price of $161,440 with all the bells and whistles! Red Multi-Coat paint, 21″ Arachnid Wheels, custom Black and White interior, and Tesla’s Full Self-Driving all add up to a whopping $25,450 to the total.

You may have noticed that the Standard Range RWD Model 3, commonly known as the “$35,000 Model 3“, is not included in this pricing range. This is because Tesla no longer offers this variant (more on this later). But, historically, this model was the cheapest Tesla ever to be launched.

Currently, the least expensive Tesla vehicle is the Model 3, a midsize, compact electric sedan. The Tesla Model 3 will continue to be the most reasonably priced option following the 2022 price hike.

The base model’s price has increased to $46,990 and now only comes with rear-wheel drive. If you want all-wheel drive and a host of other perks like enhanced autopilot, tailored interior and exterior design, and hands-off driving, you’ll need to spend an additional (up to) $22,010.

There are several higher-end Model 3 variants available for purchase as well, such as the Model 3 Long Range and the Model 3 Performance. The base price for the Long-Range model is $57,990, while the top-of-the-line model is $62,990.

In contrast to other systems, the dual-motor all-wheel drive system included in the base model of Tesla’s Model 3 uses two separate motors. Digital torque management from the motors to the front and rear wheels substantially improves handling and traction control.

With a 0-60 mph time of 3.1 seconds and a range of 358 miles per charge, the Tesla Model 3 is an impressive vehicle. Unfortunately, the charging cable (wall connector) is an additional cost regardless of your selected package, and it will run you $400 extra.

The Model Y is the newest to join the Tesla EV fleet, even though deliveries of the vehicle did not begin until early 2020 due to ongoing problems with the Cybertruck. The Tesla Model Y has two pricing tiers and two options for 2022, which are more expensive than the smaller Model 3.

The starting MSRP for the dual-motor Long Range Model Y is $65,990, which goes up to $89,990 when fully equipped. For an additional $3,000, you can get the seven-seat interior option in addition to everything else.

The Model S has the greatest driving range of any Tesla vehicle. The 2022 Tesla Model S base model, equipped with dual motors and costs a minimum of $104,990.

The Model S Plaid with all three motors is the quickest Tesla available. It has a top speed of 200 miles per hour and can accelerate from 0-60 miles per hour in under 1.99 seconds, making it the fastest mass-market car currently available. The base price for this particular model is $135,990.

The Model X, Tesla’s signature SUV, was released at the end of 2015. Despite its popularity as a plug-in hybrid SUV, the Model X is smaller than the average Subaru or Toyota. A rise in prices of this model was also witnessed part of the jacked up 2022 prices.

The Plaid version of the Model X can hit 60 miles per hour in under 2.5 seconds, making it the quickest sport-utility vehicle available. There are two distinct variants of the Model X, which start at a base price of $122,190: the Model X and the Model X Plaid.

Other Tesla Costs to Consider

There is more to a car’s cost than the figures the manufacturer or dealer provides at the time of purchase. Oh, that’s just the ticket to lock you in. Case in point, the price of a Tesla will go up due to the inclusion of various levies, some of which will be recurring while others will be one-time. Before committing to getting a Tesla, it is important to think about the following:

Your actual cost will be determined by the make and model of the vehicle you purchase, in addition to the local sales tax rate. Some regions might apply more than one type of tax on your car.

The $250 order deposit is non-refundable but required to place an order with Tesla.

You’ll need to pay $1200 to get your new Tesla from the manufacturer/factory to your driveway.

This depends on several factors, including the type of car you drive, how often you charge it, the local energy cost, how far you travel, and how often you charge it. In the long run, compared to conventional gas-powered vehicles, electric vehicles like the Tesla can save a lot of money on fuel. Keep in mind that you would need to purchase the charger separately for at least $400.

This is another area where the way you drive your car and how well you look after it ultimately dictates your expenditure. According to Consumer Reports, owners of electric vehicles and plug-in hybrids spend around half as much on repairs and maintenance than owners of vehicles powered by internal combustion engines.

This is the one cost that you probably already had factored into your purchase. After all, 87% of American drivers have car insurance, so you’re more than likely to get it for your brand new, shiny Tesla, too. Insurance is a nice peace of mind, but it doesn’t come cheap.

Despite being at the forefront of bleeding-edge automotive technology, Tesla vehicles are not exorbitantly expensive for what they are. Everyone knows you get a Tesla for the single fact that it’s a Tesla, and maybe the class-leading infotainment system.

The company still needs to iron out some corners and get the interior up to the industry standard for a mass-market vehicle. For now, though, by focusing on the tech instead of the fundamentals, Tesla has managed to keep prices under control and survive in the long-run.