Unwanted callers (people who you just don’t want to be calling your phone) can ruin even the best of days. Thankfully, the creators of Smartphones know just how big a problem unwanted callers can be, which is why all latest Smartphones have the capability to block numbers from calling you. Apple is especially keen on delivering everything that its customers need with each of its iPhones, which is why it comes as no surprise that all iPhones running on iOS 7 or higher have the ability to block unwanted callers built into them – you don’t need to download additional third-party apps or jump through any hoops.

While iPhones running on older versions of iOS don’t have any built-in number-blocking functionality, there are still ways that people using such iPhones can block callers they don’t want to be getting calls from. The following are some of the best ways to block unwanted callers on basically any iPhone:

Tap on the Phone app to launch it.

Navigate to the Recents

Tap on the i icon next to the recent unwanted caller that you want to block. 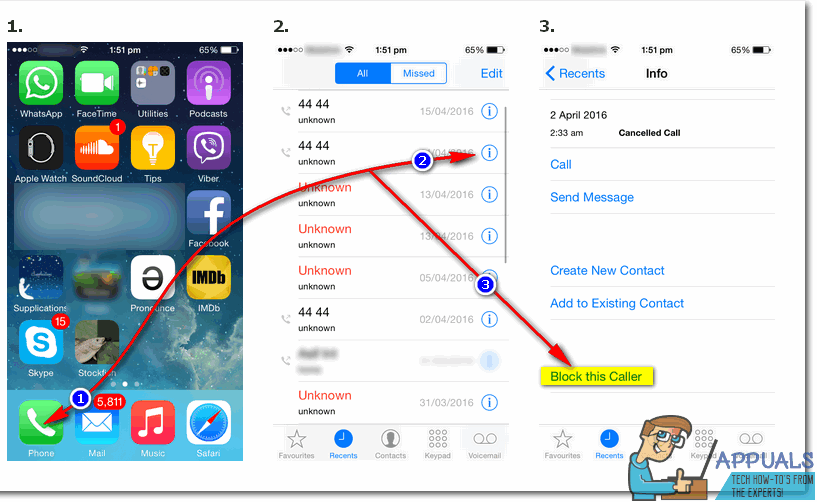 Confirm your decision in the resulting popup.

Alternatively, you can also block an unwanted caller who’s in your Contacts from the Settings app. To do so, you need to:

Tap on the Settings app to launch it.

Scroll down, locate and tap on Phone.

Scroll down once again and locate and tap on Blocked. This will display a list of all the contacts that you have blocked.

Tap on Add New… to add another entry to your Blocked

Select a contact to block and then confirm the action of blocking them.

Once you have blocked an unwanted caller using this method, the blocked number will not be able to call you and will instead be diverted to your carrier’s messaging service. The unwanted caller will be able to record a voicemail with your carrier’s messaging service, but you will not be made aware of that voicemail as it will be stored in a special blocked folder.

You can unblock a blocked contact by navigating to Settings > Phone > Blocked, tapping on Edit and then removing the contact you want to unblock from your Blocked list.

Search the app store for iBlacklist and tap on the app of the same name in the search results.

Follow the onscreen instructions in Cydia to download and install iBlacklist. Once the app has been downloaded and installed, restart your iPhone.

As soon as your iPhone boots up, launch iBlacklist.

Tap on General BL again once it shows up in the Blacklists menu, and then tap on the Add button in the top right corner of your screen.

On the Add screen, you can select a contact to block from your Contacts, your Recent Calls or your Recent SMS Messages. Alternatively, you can also manually enter the phone number and other contact info of the unwanted caller you want to block.

Tap on Save to effectively block the unwanted caller.

Once you’ve blocked any and all unwanted callers using iBlacklist, you can tap on Enable in its main menu to determine what forms of communication between you and the unwanted callers you have blocked are going to be denied. Here you can enable the blocking of calls, SMS messages, MMS messages and even FaceTime calls from phone numbers that you have added to your blocked list.

Blocking unwanted callers on all iPhones: The universal method

There is a universal, although less effective, method that can be used to block unwanted callers on any iPhone regardless of how old the iPhone in question is or what version of iOS it is running on. This method is to simply save the phone numbers of any and all unwanted callers with names that you are going to easily recognize – names such as “Unwanted Caller 1” – so that you know it’s them whenever they call you and you can then simply ignore, reject or silence their call. Screening calls from unwanted callers by actually saving their phone numbers into your Contacts is a pretty efficient way to block unwanted callers on any and all iPhones, especially older iPhones that are not jailbroken.

Pro Tip: When saving an unwanted caller’s phone number, you should consider setting an entirely different and unique ringtone for them so that you know it’s them calling without even having to look at your phone. You can also just set their custom ringtones to silent in order to make sure that their calls don’t disturb you in everyday life.

How to Block Unwanted Callers on an iPhone