Birentech, a Chinese chip firm, will be prohibited from producing its Biren GPUs at TSMC because of US regulations and NVIDIA rivalry.

Recently, the US banned all its leading semiconductor manufacturers from selling their products to China, including NVIDIA and AMD. It was stated that China might have a comparable military advantage to the United States of America if it had access to NVIDIA and AMD GPUs for AI and datacenter. The US is complicating things since TSMC is prohibited from sourcing chips from China, including the Biren BR100.

The details indicate that Birentech made their GPU using TSMC’s 7nm manufacturing node. The GPU was set to have a massive 1074mm2 surface area and 77.0 billion transistors. Birentech stated that its device would be up to 2.8 times quicker than NVIDIA Ampere A100 GPUs, some of the fastest data center chips available. The Shanghai, China-based small business Birentech created the general-purpose GPU known as the Biren BR100. At Hot Chips, the firm just made its architecture completely public. 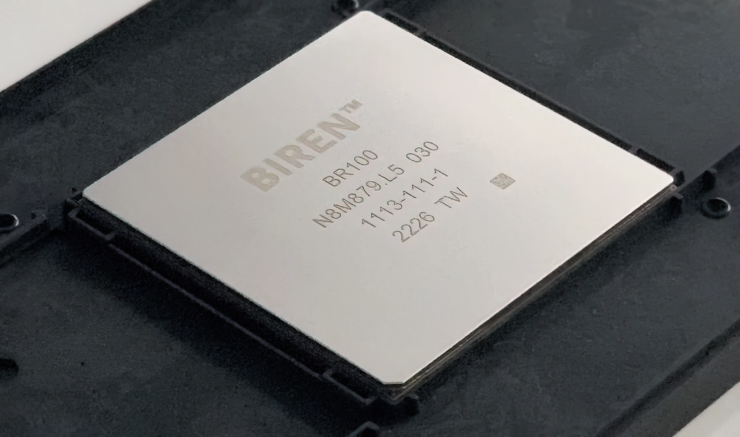 The NVIDIA Hopper H100 and Ampere A100 GPUs, which had already been outlawed in China, would have been replaced by the chip. However. According to a new Bloomberg report, the US has formally requested that TSMC stop producing advanced silicon for Birentech.

The decision is connected with information in the public domain that Biren’s products outperform Nvidia Corp.’s A100 chips, which are now banned for the Chinese market, the person said, asking not to be identified discussing a sensitive matter. While TSMC has not reached a conclusion on whether Biren’s products meet the US threshold for restrictions, the Taiwanese chipmaker has decided to stop supplies to the Chinese startup for now, the person said.”

The Biren BR100 and BR104 were among the GPUs that Birentech intended to produce to compete with Intel, NVIDIA, and AMD. With TSMC’s suspension, Birentech will have to delay or suspend the manufacturing plans for Biren GPUs for the foreseeable future. It was undoubtedly an optimistic design and one that looked like it could prove to be a significant difference for the top-three US companies in the server/AI segment in Asian Pacific markets.