If you are an audio enthusiast, a vocalist, or even a professional producer, you are probably aware of the importance of a powerful studio microphone. In a live performance, the focus is on delivering performances just as good if not better than the studio performances. This is why you see people splurging on high-end microphones. 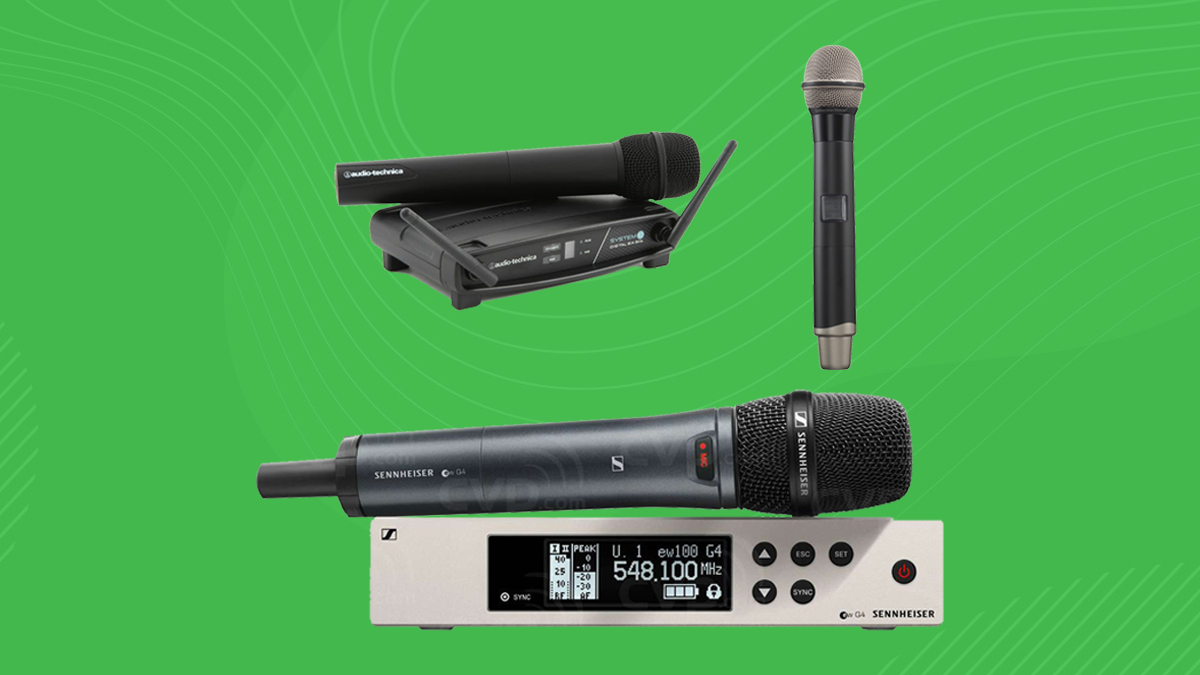 Different use cases might require different microphones. For example, singers will require high-quality premium microphones with a solid transistor, while that requirement isn’t all that important in say, a church.

With all that said, we’ll try to make the decision much easier for you. We’ve searched far and wide for the best wireless microphones, and these are some of our favorites.

Sennheiser is very well respected among audiophiles and professionals in the music industry. Their legacy goes a long way back, and it’s not just limited to great high-quality headphones. In fact, Sennheiser makes some of the best high-end microphones for a variety of purposes. The EW 100 G4 845 is their best wireless microphone.

One of the major highlights of this microphone is just how rugged it is. It’s built to withstand normal use, but it can easily handle anything you throw at it. The exterior is of high quality and is just as good as the interior. It looks like most microphones out there, but not a lot of them can withstand a lot of abuse.

This microphone kit consists of the SKM 100 G4 handheld, the 845 super-cardioid dynamic capsule,  and the EM 100 G4 rackmount receiver. It also comes with a rack kit, RJ10 linking, and a mic clip. All of these components are of high quality, and it really shows when we start talking about audio performance. The mic can work up to 8 hours

This mic was engineered for incredible live sound performance. The 845 capsule uses a lightweight aluminum transmitter and sounds exceptionally good. It has a full forward presence without losing detail. Speaking of which, it has enough detail to have clarity and sound open. There is no harshness and it rarely picks up “hissy” sounds from the user.

The receiver works well too, and we’re definitely fans of the white look they have gone for. The rack-mount kit is also included, was sold separately in previous versions. Overall without going into too much detail, the gist of it is that this is the best overall wireless microphone on the market

There isn’t a whole lot of revolutionary innovation going on in the microphone space. Most upgrades are incremental in nature, but the thing that matters the most is high-quality internals. That is where Shure has always promised to deliver, and the Shure SLX SM58 has lived up to that promise time and time again.

The original SM58 was a wired microphone, Shure has taken the same technology and implemented it into the wireless standard. The best thing about this mic is the exceedingly great clarity. The compression ratio here isn’t fixed and is variable instead. This means that the mic has a dynamic range to it. Shure has also added a spherical filter, which reduces harsh noises.

It uses a cardioid pickup pattern which means it does a good job of picking up vocals directly from the speaker while rejecting a lot of background noise. This is a good implementation for live sessions, which this mic has been tailored for. It also includes a shock mount system which reduces handling noise.

The mic has a display that shows the battery live and transmitter frequency. It operates on double-A batteries, which last about 8 hours. The mic itself is also quite rugged, which means it can withstand a lot of abuse. Overall, this is a great microphone. Just keep in mind that you’ll have to search for a compatible receiver on your own.

The Audio-Technica ATW 1102 wireless system is another great kit for professionals and beginners alike. Audio-Technica is known for making high-performance microphones at a great price. The ATW 1102 is also incredibly easy to use, which makes it viable for beginners.

The best part about this kit is that it includes everything you need to be up and running. This means you don’t have to go out of your way and hunt for separate receivers and other components yourself. I know this might not mean much to professionals, but for people who want an all-in-one package, this is a no brainer.

It has high-fidelity audio performance at 24bit/48KHz operation. It does a good job of pushing vocals at the forefront, without picking up any sort of harsh details. Occasionally, handling noise can be picked up, so that’s worth considering if it bothers you.

Channel selection is quite easy, and every connected transmitter and receiver is easy to identify. You don’t need to tinker around much when switching between receivers, or using their included receiver with a different transmitter. One minor complaint I have noticed is that Wi-Fi connections can sometimes cause interference, which has an effect on the stable connection. This is a rare occurrence, however.

Up until now, we’ve been talking mostly about professional-grade microphones for live performances. But some people might have clicked on this article to find a good cheap wireless system for a small gathering. Maybe you need one for a presentation, gathering, or even a karaoke session. For those people, the Tonor UHF wireless is an incredible choice.

This package includes the Tonor microphone and a receiver than you can plug into any source you would want to. The microphone works on UHF, as the name implies. It also supports 10 channels, which means you can figure if a certain channel is giving you interference, and switch to a different one.

It has an on-screen display that shows the channel, the signal strength, and the battery. The batteries are not included. The receiver also has Bluetooth support, but that connection can potentially cause issues. It’s not always the most reliable, so we’ve recommended plugging in the receiver to your source of choice.

The microphone has a really good range, especially considering the price. It retains its quality and stable connection at up to 80 meters, which is quite good. Furthermore, the best part about this mic is its affordability. Considering the overall quality and performance, it’s a no brainer if you are on a budget.

As I mentioned before, professional-grade microphones can get quite expensive. So when you see a complete wireless system with two microphones and a receiver, all for under $100, the temptation is real. This is definitely an exceptional value, but not without its flaws.

The Nady DKW Duo is an ideal entry-level system, with good high-fidelity audio. Let’s talk about that first. For vocals, these microphones perform quite well. They have a cardioid polar pickup pattern and do a decent job of canceling out background noise. However, the compression isn’t the best for instruments. They’re good enough for vocals, but I’d look elsewhere if you want to record guitar sessions.

You can operate either single channel or both channels simultaneously, which is a nice feature. They are VHF microphones and operate at 170 – 216MHz. The microphones have on/off controls and power LED. In my opinion, they are a good option for schools or small events where there might be a guest speaker. However, I’d steer clear if you want to record instruments. Still, the value is hard to ignore.