When VR started to generate some buzz a couple of years ago, not many would have imagined it would become so popular. It was highly expensive and seemed like the kind of technology that gets embraced by the rich and then burns out after a while when something better comes up. But fast forward into 2021 and VR is bigger than ever and it only seems to be gaining traction. 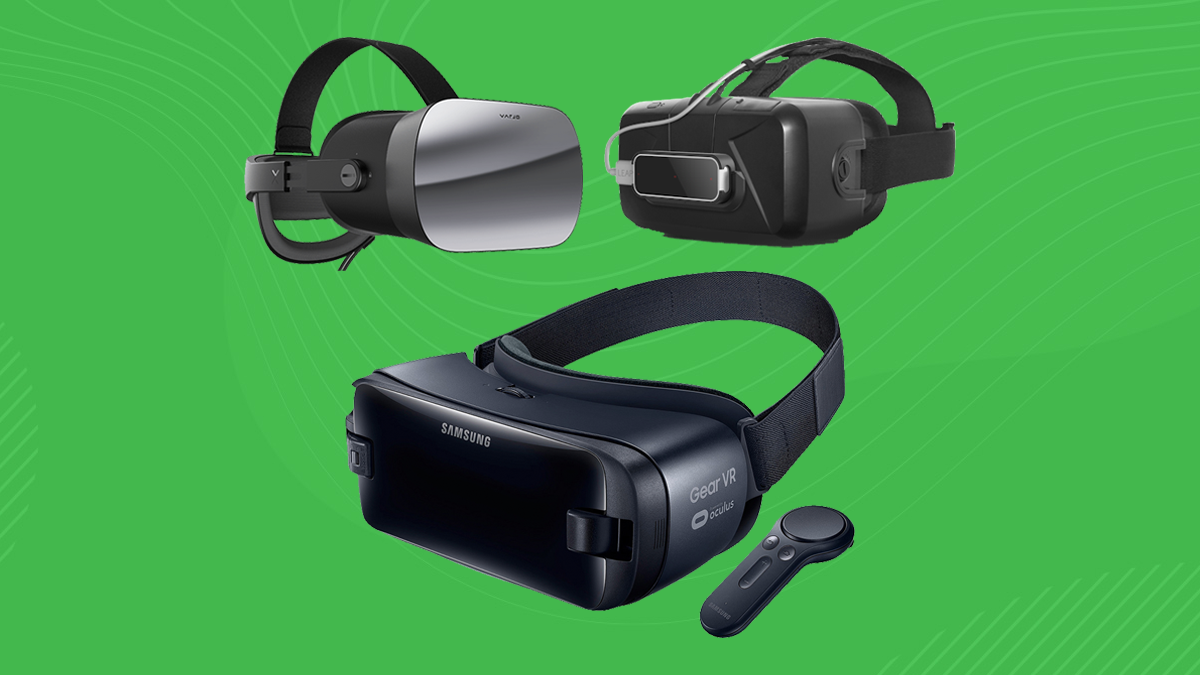 Now you can enjoy your favorite band’s show as if you are there, choose from an unlimited library of VR experiences and watch movies in a truly immersive mode. Of course, we can’t forget gaming. Games like Beat Saber have garnered a lot of attention, and the upcoming Half-Life: Alyx promises to become the first major big-budget VR title.

Now, all of that is really exciting, but with the plethora of options available, how do you pick a VR headset for yourself? Well, we have narrowed down the list, and these are 5 of the best VR headsets available today.

Oculus is arguably the one that started it all. They have been working on VR way before they were bought out by Facebook all the way back in 2014. The original Oculus Rift was an exciting peek into the world of virtual reality. But it wasn’t without its drawbacks. For starters, the clarity wasn’t all that great, handling the wires was a mass, and you needed a beefy PC to power it all.

The newest iteration in the lineup, the Oculus Rift S hopes to fix all those issues and add some new features to boot. The Rift S adds inside-out tracking which means that there is no need for external tracking stations. Instead, it utilizes five cameras built into the headset for tracking. This makes the headset a bit more portable, and easier to setup. You still have to deal with the Displayport and USB 3.0 cable, however.

The controllers are arguably the best out there. Sure, in the end, it comes down to preference but a lot of people will find these controllers quite comfortable and easy to grip. That’s important when you are playing a fast-paced action on rhythm games.

The tracking on the Rift S is top-notch, and it’s comparable to more expensive headsets. Yes, external tracking systems usually are better at this, but then you’ll have to set up all those cameras, and you might even have to buy that equipment separately. It’s comfortable to wear as well, glasses or not. This is something Oculus has improved at a lot, especially since the original Rift was a bit clunky.

In summary, the Rift S has perfected the basic aspects of a great virtual reality headset. The resolution is high enough so clarity isn’t sacrificed, it’s comfortable, the controller is perfect, and it supports almost every VR game on PC.

As for the cons, the microphone could have been a bit better, and the refresh rate is lower compared to the competition. Apart from that, the Rift S is a great value and will please both enthusiasts and newcomers to VR

For The PlayStation Fans

The PlayStation VR is the first-ever VR headset to support gaming consoles but as you might have already deduced, it will only work for the PlayStation consoles. PS4 and PS4 Pro to be precise.

This VR headset comes with a single 5.7” OLED 1080p display running at 120fps. This is a deviation from the other headsets on our list that feature split displays. You will notice that the images are sharper and cleaner and that is because the headsets have a higher subpixel count.

For better motion tracking, the PSVR not only relies on the built-in sensors but also on the dual-lens PS camera that tracks your movement by following the blue LED lights that are visible in the image. The camera is bought separately.

In terms of controls, you can use the standard PS Dualshock 4 controller, Sony Motion controllers or the new Aim controller. As you can expect, the collection of available VR games is impressive. Moreover, you can play the regular PS4 games in theatre mode which gives you the impression you are sitting in front of a large screen. And finally, when you are done playing games you can switch to Cinematic mode to watch a movie or your favorite TV show in a true VR experience.

If you are looking for a way to make your PS4 gaming time more exciting then the PSVR is the perfect opportunity. You will not be missing out in terms of available games to play and this VR headset still holds it ground compared to some of the newer alternatives.

Not to mention, its the only way to experience VR on your PS4, and it’s a great experience at that. However, if you have the budget and a beefy PC, I would recommend investing in a VR headset for your PC, as you’ll get better performance and potentially a better resolution on the more expensive PC headsets.

I highly doubt I need to explain Valve’s history to most people out there. Whether you are a PC gamer or not, you have probably heard the name a thousand times before. Anyways, we already know we’re getting a new Half-Life game in March of 2021. So it feels only right that Valve should have their own VR headset by now.

Meet the Valve Index. It’s the next generation VR headset we’ve all dreamt of, and it gets a lot of things right. It has a high enough resolution so it doesn’t sacrifice visual clarity. The “Knuckle Controllers” are comfortable to hold and fun to use. Not a lot of games fully utilize these controllers as of writing this, but if games adapt to it in the future, they could be quite promising. They are comfortable and fun to use, and the grip is quite solid.

But the main benefit of this specific headset is the wide FOV and the higher refresh rate. With a maximum horizontal 120° field of view and a refresh rate of up to 144Hz, this is a very promising headset. Games look absolutely gorgeous with this headset and the wide FOV and refresh rate combine to give an experience like no other. Games are smooth, fluid and visually impressive. It has great built-in audio, and the microphone is quite decent as well.

It also happens to be one of the most comfortable headsets out there. That’s all fine and dandy, but there is one very important thing to keep in mind. This is very much an enthusiast product, it’s for the people who don’t mind spending a lot to get a great experience. The full kit with the external tracking sensors, the headset itself, and the controllers will run you a pretty penny.

There’s also the issue of dealing with SteamVR. Games on SteamVR can be a bit hit or miss, and it is prone to crashes at times. But that’s an issue with the platform, not the headset itself. Yes, it is expensive but compared to other higher-end headsets out there (some of which you have to buy controllers and sensors for separately), it’s a good buy for the virtual reality fanatics.

The Oculus Go is here to usher in the future. A future where you won’t need a phone, PC or console to enjoy virtual reality. Okay, you will still need your phone in the initial stages to set up the VR headset by installing the Oculus app. Once you log in to the app, you will need to link the headset to your Wifi and grant it access to your location. You can also use the app to discover the latest VR games, apps, and experiences.

The Oculus Go is powered by a Qualcomm Snapdragon 821 mobile platform which is probably the reason it is not as expensive as the more advanced VR headsets. Surprisingly it has better picture quality than the HTC VIVE and the Oculus Rift. It comes with a 5.5-inch 2560×1440 display with 538ppi. To top it off, it comes with a built-in spatial sound for a true surround audio without the need of an external headphone. You can couple the headset with the melodyVR app that allows you access to live music while in virtual reality for an even better experience.

In case you wear glasses you can still use the Oculus Go as it includes spaces to accommodate the glasses. Alternatively, you can opt for prescription lenses that eliminate the need to wear glasses. This VR headset has a field of view of 110 degrees and refreshes rates of either 60 Hz or 72Hz. The controller is easy to use and makes navigating to various functions on the headset a breeze.

On the downside, the Oculus Go only allows tracking in 3 directions since its 3DOF, unlike its competitors that track movement in all directions. At full power, this headset will allow you 1½ hours of use if you are gaming or about 2½ hours when watching videos. This version of the Oculus Go comes with 32 Gb storage but for a few more bucks you can get the 64Gb edition as well. More space means you can carry more games videos and apps.

The other feature you are certain to love is the ability to link up with your friends in virtual reality. The Oculus Rooms function allows you to create a virtual apartment and invite up to 3 friends with whom you can play games or watch a movie.

This VR headset is great since it is not dependent on other devices to work. And you would think that this makes it more expensive but no. It remains cheaper than the tethered headsets and the best part is that you can carry it with you anywhere you go and still be able to use it.

The original HTC VIVE was released way back in April of 2016. It’s been quite a while since then, and the competition has caught up considerably. The HTC VIVE Pro was a very, let’s say, interesting upgrade. Sure it basically took everything from the original and cranked it up to eleven. However, it was quite expensive back then, and it’s still not the most affordable headset today.

The HTC VIVE Cosmos hopes to fix that issue. It has an impressive resolution of 2880 x 1700, so visual clarity is quite pleasing to the eye. Motion tracking is much better on the VIVE Cosmos, which is important since it was a bit inaccurate at launch. The 90Hz refresh rate is a nice upgrade from the 60Hz of the original HTC VIVE. The controllers are familiar, but they can be quite heavy and uncomfortable after some time.

The VIVE Cosmos implements a new design, and it looks much better than the original. We are definitely fans of the blue color they have gone for. The Cosmos is comfortable to wear, and the flip-up display is a nice touch. It also has integrated headphones, which are decent at best. The mic is quite good, which is a rare sight on many headsets, even in 2021.

If the controllers weren’t as heavy, this headset would probably be higher up on this list. However, there is a bigger issue with the VIVE, and that’s the retail price. For what its worth, it is a better headset than the Rift S, considering the higher refresh rate, better resolution, and a better-looking design. Still, it doesn’t justify the price increase compared to the Oculus Rift S.

For some people, it could be a great headset, especially if you’re coming from the original VIVE and don’t want to put your trust into a different brand. The VIVE Cosmos can also utilize the wireless VR adapter, so you can get rid of wires. If you are comfortable with spending more, the Cosmos could be a better product for you, but not by much.