A lot of jobs require employees to sit in front of a computer screen and write e-mails, drag and drop files, and make spreadsheets all day long. After a while, things can get repetitive, but I’m not talking about the actual workflow. I’m talking about the same motions we keep doing with her hands to manoeuvre the cursor around the screen. You can cause carpal tunnel or wrist pain to yourself after hours of doing the same thing. 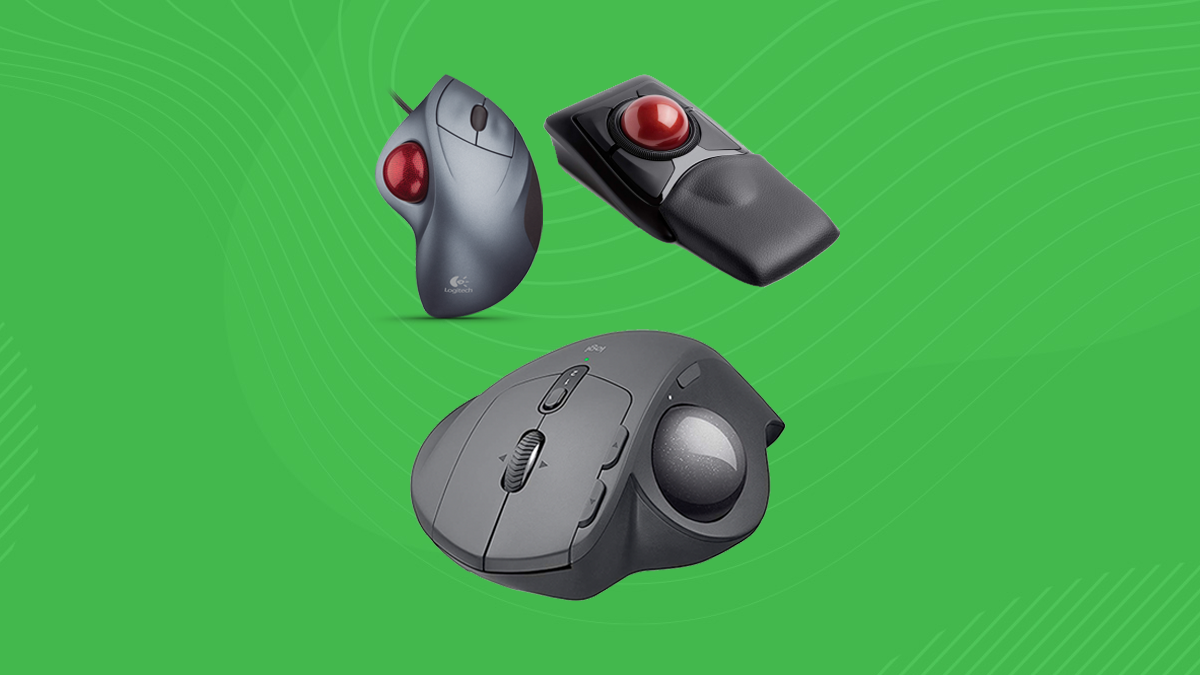 Trackball mice are good in regards to comfort. You’re not moving your wrist around as much, so it feels better to some people than using a regular mouse. They’re also much easier to repair if the trackball stops working. Just pop it out and replace it, but even just cleaning it properly does the trick sometimes.

The Best For Comfort

This is the mouse that is responsible for starting this conversation all over again. Logitech decided to go back to the drawing board and renovate one of the most successful products into something more modern. When the MX Ergo came out, it was an immediate head-turner for a lot of people. This inspired many manufacturers to hop on the trend, and we see more trackball mice being made every day.

The main focus of this mouse is comfort, hence the “Ergo” name. You can even tilt the mouse 20 degrees for more elevation which some people might find more comfortable. The 34mm grey ball is a joy to use. It’s surprisingly easy to get used to, and because it doesn’t require much wrist movement, it’s great for travel.

The mouse has a soft plastic coating and spaces to rest your thumb and pinky. All the buttons are easy to reach, and the left and right buttons are rated for 10 million clicks. Otherwise, they feel like standard buttons. Apart from that, you have all the usual great Logitech features.

You can connect two devices, one with Bluetooth and the other with the 2.4GHz wireless dongle. Seamlessly switching is as easy as pressing the switch button in the middle of the mouse. It even supports Logitech Flow, which means you can move the mouse cursor between two screens.

The battery is supposed to last about 4 months, and that claim seems to hold up for the most part. It’s a bit expensive, but this is the best trackball mouse out there.

If you really want to go old-school, then the Kensington Expert Wireless Trackball Mouse is a solid option for you. It’s a finger-operated trackball, which makes it a bit different to use compared to the thumb-operated trackball mice. However, this is not just an expensive nostalgic blast to the past, it’s actually one of the more precise trackballs out there.

The first thing that stands out immediately is the design. This thing is massive, and I really do mean that. The red trackball is almost the size of a ball you’d see in a game of snooker. It is bright and looks like a large red eye staring at you menacingly. The angled edges also give it somewhat of an aggressive look. It’s not boring, that’s for sure.

The large trackball feels precise and smooth, and the design is ambidextrous so anyone can use it. There are four buttons at each corner, that can be customized with software. The large size of the ball does serve a purpose, as moving the cursor around larger displays is much easier. Flip the mouse over and the ball will pop out, which makes it easy to clean.

Kensington has also included a wrist rest which is optional to use. With the added wrist rest, it takes up even more space but overall comfort is much improved. The connection is done seamlessly through Bluetooth or the 2.4GHz Wireless dongle. Instead of a scroll wheel, Kensington has included a “scroll ring” with this trackball.

The ring feels alright, but it feels a bit rough and janky to use. That could become a bigger issue over time.

There is one major thing that your RGB heavy Razer mouse most likely does better than a trackball, and that’s gaming. You can not comfortably play FPS games with a trackball, that’s for sure. However, there are a few games like MMOs and real-time strategy games that you can enjoy just as easily with a trackball.

That’s where the Elecom M-HT1URBK comes in. It has an ergonomic design, 8 buttons, and optical sensor, and a striking red trackball. The trackball is positioned in a way so that you can move it with your index finger, rather than your thumb. I know some people will prefer this and it’s much easier to transition to from a regular mouse.

The trackball is very responsive and the accurate sensor gives precise movement and tracking. Using it with the index finger is surprisingly more intuitive than I initially would have thought. However, there is a small issue, it doesn’t do so well with smaller or tinier movements. It is fine for the most part, but it can be a bit janky.

A wireless version is also available, but it does cost significantly more and doesn’t have the best battery life. I do like the texture and the round shape which helps with grip. A tonne of buttons are here for all of you MMO fans. There is also a scroll wheel on the left side.

The buttons don’t feel the best, however. They are decent enough for gaming, but I would have liked a sharper click to them. However, if you’re not used to extremely high-end gaming mice, that’s a minor complaint.

Up next we have another trackball mouse from Kensington. This is their budget alternative to their more expensive model. It is similar to most older trackballs in terms of the grip style, as you move the ball around with your fingertips. However, it feels a bit dated in terms of overall function.

Let’s start off with the good stuff. It has a very comfortable and wide shape. Meaning that you can rest your whole palm on the plastic bits and use two or three fingers to move the trackball around. The blue trackball is a good sight for sore eyes and looks refreshing compared to all the bright red options out there. It also has good friction and moves around smoothly.

It is a wired trackball, but considering how big it is, I wouldn’t travel with this anyway. The build quality is quite good and should hold up over time. Overall, it’s a great trackball for casual use, but not without its issues. What’s the root of these issues? The outdated optical sensor.

It’s good enough for day to day use, but if you need to do any sort of precise work, the sensor will start to show some problems over time. The buttons also have a weird positioning, as they are quite wide apart. If you can look over those issues, this is a solid trackball for web browsing and casual stuff. The scroll ring is quite smooth easy to use, which is worth mentioning.

Our last pick is definitely a nostalgic one, for better or for worse. The Logitech Trackman is an iconic piece of history when it comes to mice and trackballs, and it still has a small yet dedicated fan following to this day. However, it does have some quirks and issues for the modern user.

The comfort aspect, however, still holds up to this day. The ambidextrous shape is sculpted in a way so that both left-handed and right-handed users will feel comfortable with it. The trackball is quite smooth and feels good to touch. It’s a joy to move it around and is responsive enough for casual usage.

Design is where the Trackman starts to show its age. Actually, this design is based on the initial 1999 release of the original Trackman. It has still held up well in terms of comfort, but the sensor, unfortunately, hasn’t. I’m not saying the optical sensor is old, but it sure feels like it at times. I wouldn’t use it for any sort of gaming, not even MMOs.

The buttons are spaced wide apart, but they are easy to get used to as they are convenient enough to reach easily despite the spacing. Overall, I’d recommend this for a casual web browsing experience or if you’re feeling nostalgic. You could certainly do much worse for the price.