Imagine your PC without a keyboard? You can’t, right! Without a proper keyboard, the computer that we know today kind of seems incomplete and that is true. Whether you’re a typist who’s typing away free from all the worries of the world or a gamer undergoing an intense gaming session, it practically makes your life a hell of a lot easier. 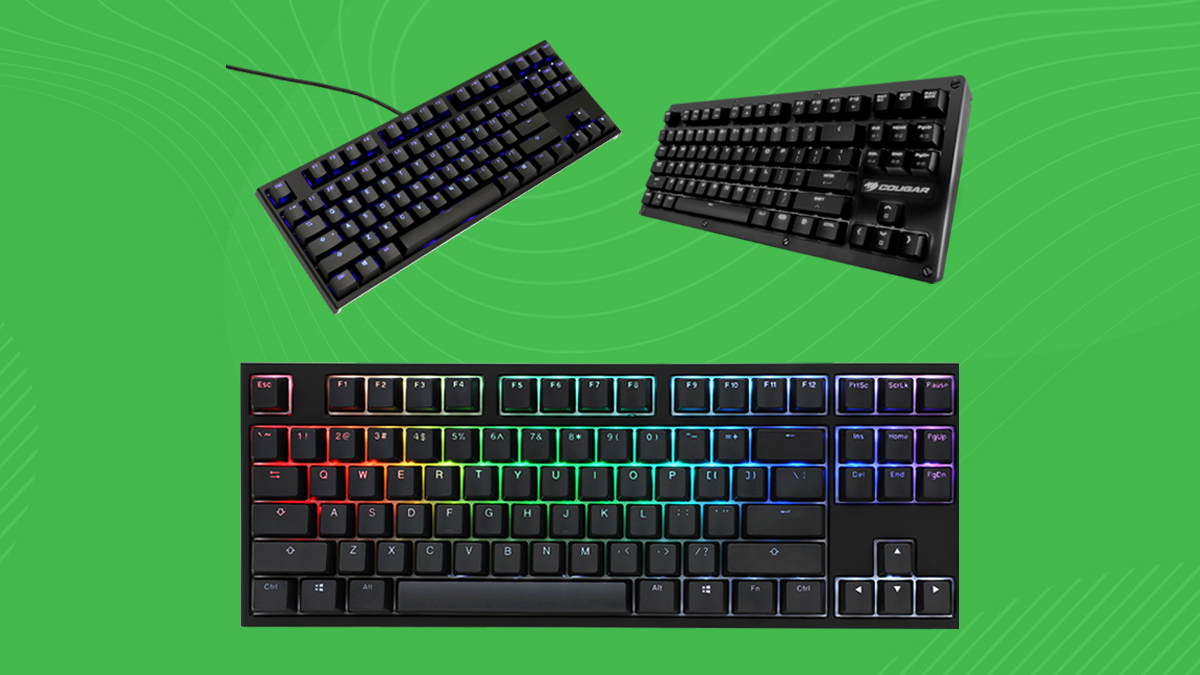 Since the world of technology is and will be forever variable so keyboards are no exception as they come in a lot of shapes, sizes, and functions. They might also feature separate key arrangements which deviate from the conventional QWERTY arrangement. Since Ten-Keyless keyboards are the smaller and more portable variants of the bunch, we will be shedding some light on which ones might be the best for you if you’re on the lookout for one. Let’s get started!

HyperX Alloy FPS Pro is Kingston’s top-of-line Ten-keyless keyboard with its superior build quality which clearly stands out. And as sturdy as it is, it is surely built to last with an exterior steel frame that provides a premium finish along with a rigid design for slip-free performance. It features Cherry MX Red switches which give out a balanced performance between typing and gaming. They might not be as clicky as their MX Blue counterparts but definitely quieter and with a low actuation force which makes it easier to press. It also features the traditional bells and whistles of a decent 21st Century keyboard that is the Anti-Ghosting and N-Key Rollover capabilities, which makes sure that you never go wrong with your keys even while vigorously bashing them.

A couple of additional proprietaries and cosmetic features include the customizable Red backlit LED. Now a downside would be that the lighting is monochrome but the brightness and the lighting scheme can be tweaked within the settings of the keyboard to provide different outlooks every time. It also includes a gaming mode that locks down the keys of the keyboard which might provoke a wrong key press that can throw you out of the game. It only houses two light indicators which include the Caps Lock and Game Mode indicator on the right side of the keyboard.

HyperX is a well-refined product that gives out an impressive performance with keeping aesthetics in mind. This would prove to be a very efficient and portable purchase.

Razer has always been a gamechanger and this time is no exception when it comes to the BlackWidow Tournament Edition Chroma V2. The Razer Chroma series boasts RGB lighting capabilities in which you get to choose from a color palette of 16.8 million color combinations. It also features remappable lighting and buttons through Razer Synapse, proprietary software from Razer.

Another impressive peripheral that is included in the box is the magnetic wrist rest, which can be conveniently mounted on the keyboard for those long typing or gaming sessions. Razer was also a part of the Cherry MX club for a while until they decided to produce their own switches and now this keyboard features Razer’s own Mechanical Switches which are pretty responsive with low actuation force and all while maintaining the clicky feel. This output is refined with the Anti-Ghosting feature.

The thing which separates Razer from all of the other competitors is that it has individually lit keys which means that each key can be customized and remapped from the color choice of 16.8 million colors. Responsiveness is taken up a notch with its Razer Instant Trigger Technology which minimizes the keypress response time and provides better input to the system.

Although Razer BlackWidow TE V2 might be the absolute package, one drawback would be its price which stands above a normal price tag but it still can be considered in terms of its uncompromising performance that can elevate your keyboard experience to the next level.

Logitech G Pro Mechanical Keyboard is a well-built and sturdy keyboard reinforced by a steel backplate to ensure uncompromised durability. It houses Romer G Switches which can perform 25% faster actuation as compared to normal mechanical keyboards along with the conventional backlit RGB lighting. This gives it the ability to instantaneously display the output on the screen.

The 26 Key Rollover mechanism is quite reliable considering that you can press 26 keys without cluttering up the output signals that the keyboard is processing to the system. It also comprises a more accurate Keystroke Signal Processing Mechanism which gives it the edge of a 10 ms faster command registry, the difference might not be that much to a lot of average consumers but avid gamers are highly susceptible to sense this difference.

The detachable Micro USB features a three-pronged design that ensures seamless connectivity and that the cable never loosens due to the movement or dismounting of the cable to future-proof your purchase. Other proprietary features include Logitech’s Gaming Software which automatically detects the game from your system and suggests the suitable lighting profile out of 300+ preconfigured ones. Light sync also enables you to customize the lighting profiles as per your requirement but these keys are not individually backlit so that would strip it of its vast range of options that the Razer offered on the other hand.

If you are looking for a mid-ranged tenkeyless keyboard for mild typing and gaming requirements then this is definitely the kind of keyboard to consider.

SteelSeries Apex M750 could be considered as the underdog which fights its way to the top with its significant performance and reliability. The frame is forged with a 5000-grade aluminum alloy which makes it the most durable in terms of build quality out of all of its competitors. This not only provides a decent and rigid outlook but also gives it a premium weight to hold and carry around with ease.

It houses SteelSeries’ QX2 Linear Switches which stand by its terminological meaning that is, the switches feature a linear membrane unlike the other mechanical keyboard switches in the market. This typically generates less noise and deprives you of the swiftly clicky feel of a mechanical keyboard, in fact, this noise can be so important at times that it can influence a buyer’s decision.

Nonetheless, it provides a decently moderated output in terms of typing and gaming and doesn’t crumble entirely on either side. It also comprises an Anti-Ghosting feature to prevent keypress misses and rapid responsiveness. Now moving to the firmware side of things, it includes a Discord Chat Notification which uses dedicated lighting LEDs to notify of incoming chats, mute, and other similar preferences. This is not limited to chat notifications but also notifies you of In-Game Notifications that are low ammo, health, or other important indicators which can add to your immersive gaming experience. The LEDs are also customizable with their PrismSync compatibility that can give you quite a light show when you need one.

If you have been searching for a keyboard with a sturdier build quality then the aerospace 5000-grade aluminum chassis integrated SteelSeries Apex M750 can indeed be the option to go for along with a couple of other influential factors as elucidated above. 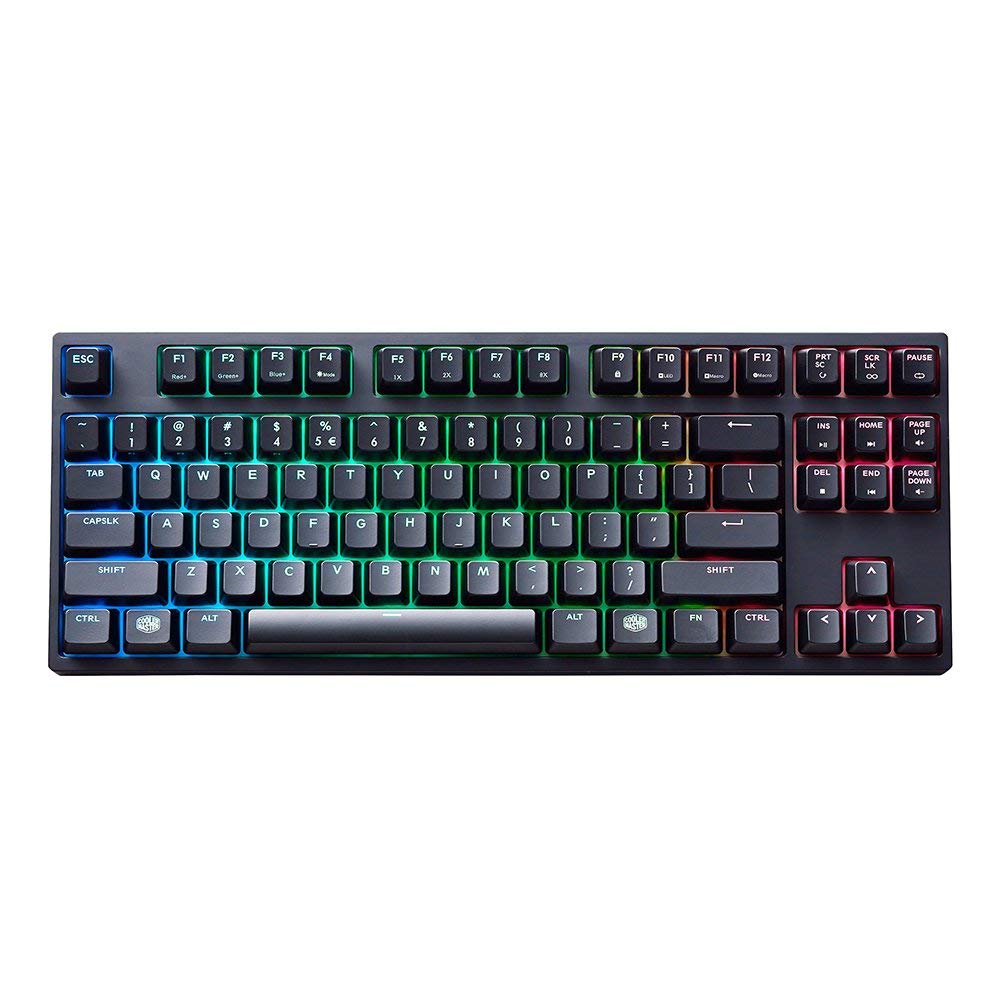 Cooler Master’s global presence and distribution already have sparked up its reputation and the MasterKeys Pro S RGB Mechanical Keyboard is no less than a notoriously equipped keyboard with pretty sweet features. Now starting from the cosmetic features, it contains customizable RGB LEDs from a color palette of 16.7 million color combinations. Another unique feature would be the preset combinations which can be switched without the software and some of them include color wave and breathing effects. You can also navigate your way through programming multiple keystrokes in a single keypress and per-key backlighting.

That was all about the aesthetic appearance but now progressing onto the performance features, it includes Cherry MX Blue switches which are by far the most tactile and clicky Cherry MX switches you can get, out of its Red and Brown counterparts. The clicky nature adds to the element of the mechanical keyboard and incorporates a satisfying feel. Along with super clicky and responsive switches, it also features conventional Anti-Ghosting and N-Key Rollover measures.

To give an overview of this specific item would be that it offers a full head-on package with its responsive and accurate performance along with the convenience of changing color presets of the lighting without the hassle of proprietary software. This is a minimalistic yet innovative keyboard that can surely be worth a buy.