There are so many occasions and events that befall yearly that require you to provide young children with fascinating and enchanting gift items, and let’s be honest, what parent wouldn’t want to see that cute chubby face of their bairn to glow up as they tear off the gift wraps excitedly. Being in this era, board games and dolls are toys of the past.  Children light up at the sight of something out of the ordinary. Something they can show off to their next door neighbor’s kid. 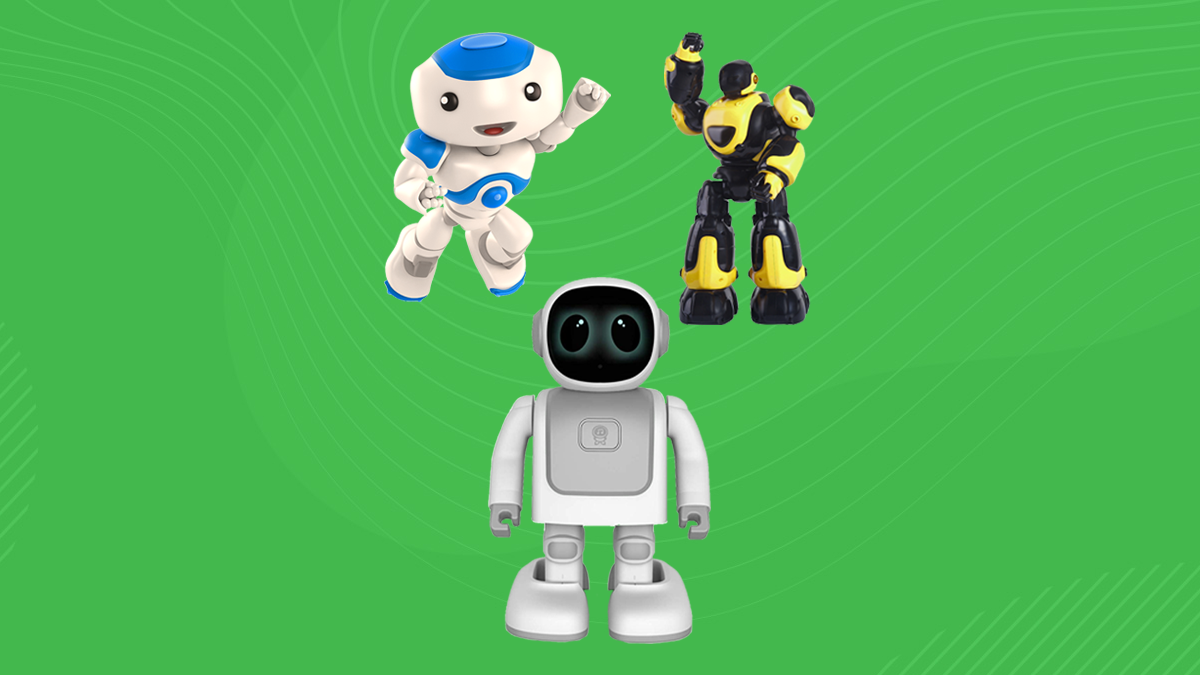 Something they look at and squeal at the top of their lungs, “Thanks mom/dad! You’re the best!”.  And we deem that there is no more befitting item in the toy store than a ‘Toy Robot’. Yes, robots are no longer an item of manufacturing industries. A simple press of a button and the bot can be standing right in your living room, entertaining you and being undoubtfully your best purchase yet. It is analogous to having a pet, but even better. Because you don’t have to change the litter or have asthmatic attacks, or feed it, yet it can walk, it can make sounds, it can play and have mood swings. Toy robots are the best example of technology inculcated into toys. Not only are they absolutely enthralling but some are educational even.

If you’re someone who adores pets and animals in general, you’re definitely going to get emotionally attached to this adorable piece of circuitry. Do not be deceived by the Boxer’s small appearance, because this mini A.I robot is going to win you over with the wide variety of emotions that it expresses and silly sounds it makes. The Bot comes with 10 activity cards, for example, Bot bowling, paddle Bot, Laser Tank and go Kart, or you could also use the interactive ball accessory, that comes with the robot, to play a fast-paced game of soccer! What’s even more thrilling is that you’re not limited to just these 10 cards, but can unlock a myriad of other games simply by downloading the app designed for the Boxer which is available on both, Android and iOS.

A remote control is also included just in case you want to take charge. The bot can spin, do somersaults and perform wheelie tricks flawlessly, all thanks to the multi-directional infrared sensing and speedy balancing motors. It is also super quirky and responsive to its master’s gestures. Your simple hand movements will trigger it and it will scoot and follow you around in the most adorable of ways. And if you ever feel that energy is draining from your little pet, don’t you worry, the micro-USB charging cable (included) will help you through this tough time. With all this excitement packed in a tiny body that barely weighs 14.4 ounces, this robot is highly recommended for kids for interactive entertainment. You and your child will surely fall in love with this pint-sized bot.

A lot of fun packed in a tiny spherical ball? Yeap, that’s Sphero Mini for you. This beauty is an app-enabled robot, about the size of a ping pong ball. The app permits the user to toggle between various techniques to control the bot including a standard virtual joystick, tilt controls, slingshot and, finally, face driving. Yes, you read that right, the Sphero Mini is controlled by mere facial expressions that are perceived by the camera of your phone and the simple tilt of the head results in different directional inputs.

You get some accessories with your purchase as well, which you can use to devise your own fun and games. These include a set of traffic cones – perfect for slalom courses – and some pins for bowling hijinks. Sphero Mini has a little gyroscope, accelerometer, and LED lights. Its battery lasts for almost an hour. The Sphero Edu app can be used for programming your Sphero Mini using Javascript. Oh and best of all, this bot comes with interchangeable shells, meaning you can switch the shell colors, suiting your mood. Exciting, isn’t it? Do NOT underestimate this precious guy.

On third is the JIMITE robot. If you’re low on budget but still want to be able to afford a toy robot for your kid, this is the one for you. This robot is similar to those seen in the children’s comic books, but comes with a number of functions and features that other robots are devoid of.  There are ’12 Modes Multi and Comprehensive Functions’ which include the following: patrol and obstacle avoidance, singing, dancing, speaking, sliding, walking, turning, learning good habits, science education, auto display and finally, programming.

The JIMITE also comes with a remote control that is capable of controlling the illuminating LED eyes of the bot, engaging sounds, and producing music. Not only that, but it can also be controlled by simple gestures. Both, your hands and the remote can do the magic and bring the bot to life. What makes this robot unique is that it’s not the only toy to play with, but is also an interesting educational tool, helping kids gain knowledge without getting stultified. The robot will teach kids popular science, songs, and English. This bot is definitely going to be your child’s favorite mentor and playmate. The “Programming Mode” has 50 sets of actions for the bot to perform, the “Science Knowledge Mode” contains simple and basic knowledge of astronomy and the “English Mode” contains greeting, tools, digital and traffic information and lastly, dialogues.  The feet of the bot are equipped with high-quality bottom skating wheels that aid in walking and sliding with the four-directional driving mode: forward, backward, turning right, turning left. Keeping in view the retail price of the JIMITE, we believe that this is the most economical options out there.

This fourth robot is proof that dinosaurs have not been extinct yet. Dinosaurs have never been this friendly and lovable! This dino can be tamed and trained using the following methods: hand gestures, the trackball or the MiPosaur app. The bot has three different moods, that are: excited, curious and annoyed. It follows 10 different commands including swipe, clap, scare and a lot more, and it’s reaction to each command varies according to its mood. Does it look like we’re talking about a robot and not an actual living creature? We think not.

The box also comes with a TrackBall. The TrackBall is equipped with BeaconSense technology that allows the robot to follow it around. With this multi-functional ball, one can take their MiPosaur for a walk, play dino in the middle, play fetch, feed the MiPosaur and make it dance and even transform the bot into a living beat-box! Lastly, we have the MiPosaur app that unlocks a new facet of playing with the dino. The app is available for both, Android and iOS devices. It includes tons and tons of features including driving the MiPosaur, battling against other MiPosaurs, feeding it unique food items like steaks, socks, cavemen and more! The bot can dance to songs from your Music app as well, what a bundle of joy! Yes, this robot is a little expensive as compared to the rest of the toy bots, but with all the exciting features it has to offer, we believe it is quite worth it.

If you want to make your child the happiest of children this Christmas, but don’t know how to do so, don’t fret. We’ve got you covered. The WowWee MiP could be your kid’s next favorite toy. This robot is all about ‘gestures’.  The GestureSense allows your robot to respond to gestures like swipes, claps, touch and more. This bot will trace and follow your hand like a faithful loving puppy.

It can also be driven with the aid of the app designed specifically for this robot, which is available on both; the AppStore and the PlayStore. This app allows you to, not only draw patterns for the track you want your bot to follow, but it also allows the bot to battle other WowWee bots! So grab your bot, a friend and their bot, and you’re all ready to have the clash of your lives! The robot is also capable of carrying its own weight. The quality that makes the WowWee MiP stand out from all the other robots is that the MiP is a ‘real character’. It speaks the language of MiPish, a combination of MiP and gibberish. You can feed it mood chips via the app to see just how amusing it can be! The dual wheels contain gyros and pendulum-based balancing systems to make sure that the bot can stand on its own feet. It also contains a flawless sound system that allows it to respond to a variety of noise and sounds in the environment accordingly.