In our world of convenience, and well, laziness, no one likes things to be cluttered. A lot of the clutter in our lives is due to the number of devices we have these days. Especially in our living room. We have consoles, Blu-ray players, PCs, and even Chromecasts all hooked to our TVs. Now some of you might not have all of these, but we’re willing to bet you have more than one device plugged in. 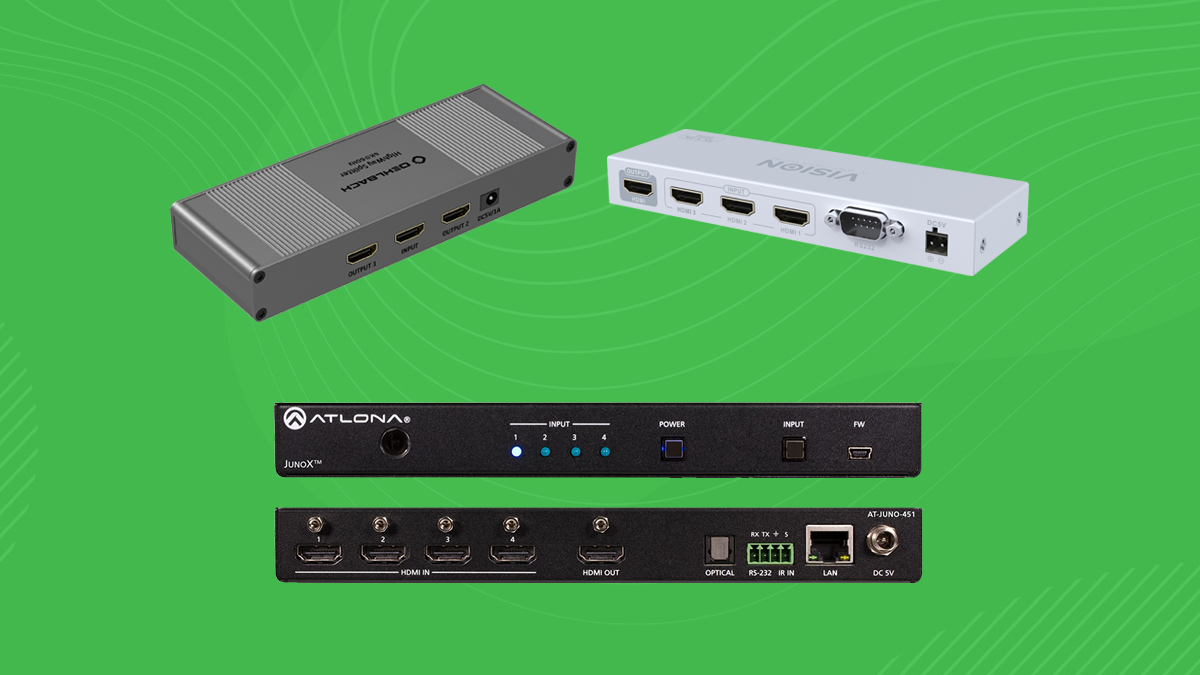 Now, this isn’t exactly a problem per se. However, you’ll quickly notice a lot of cables creating a mess on your wall. You can fix with this an HDMI switcher. This switcher allows you to have multiple ports, so you can manage them easier. You don’t have to reach around your TV this way either. Furthermore, it also gives you more ports if your TV doesn’t have a lot.

So, with all of that in mind, here are some of the best HDMI switchers worth buying in 2021.

Kinivo 501BN holds first place with respect to its impressive performance and output that comprises a hybrid aluminum body. This hybrid build allows it to be more consistent with its performance and cooling as it proves to enhance the heat dissipation capabilities of the body.

Now as we proceed to the more technical side of things, it houses a plethora of ports with a decent 5 in 1 output mechanism. This means that it provides room for 4 inputs that can simultaneously function at the same time. Another noticeable feature would be the inclusion of an auto enable/disable switch which basically functions as a regulator for the ports and senses to work only when the signal is transmitted from the source.

With the satisfaction of a premium build, it also boasts resolution support up to 4K @ 30Hz. This resolution might not be a dealbreaker for some but for those power users, they might miss out on the 4K @ 60Hz capabilities that other switches might possess but then some compromises can be made when it comes to the power-packed range of ports that you can get at a manageable price. This also includes 3D support.

The 5 in 1 output can be significantly useful in providing the neat and clutter-free output that you had always longed for. This can easily bear the responsibility of accommodating all your multimedia devices and gadgetry such as gaming consoles, TV boxes, and Blu-ray players.

Kinivo 501BN is definitely a must-have if you are searching for an HDMI switch regardless of budget constraints.

With Zettaguard on your side, you can pretty much never go wrong as it stands out to be one of the topmost contenders when it comes to HDMI switchers. It presents a plastic lightweight exterior with curved edges to stimulate a better finish.

It showcases a 4 to 1 output structure that translates into an input of 4 with a single output that would connect to your desired display. Furthermore, it also features Dolby Trued and DTS-HD Master audio capabilities with LPCM 7.1 CH which means a more refined audio experience than ever before.

As far as the internal working and performance are concerned, it comes with HDCP v2.2 compatibility for a seamless flow of switching between connected inputs while maintaining the resolution of 4K x 2K with an impressive refresh rate of 60Hz. The Picture in Picture mode also provides an insight into the situation when it comes to switching between your desire inputs as it can support up to 3 sub-screens with 1 main screen, enabling you to multitask by switching screens with the push of a button on your infrared remote.

This switcher is IR-powered and configured to establish a seamless and fluid remote switching system. Whereas the Zettaguard might have the upper hand in terms of display frequency, it does lack in the number of ports as compared to the Kinivo 501BN which puts it at a slight disadvantage if you have more than 4 devices to connect.

Zettaguard can fix you up with a good package in terms of balanced performance with the price which makes it an obvious choice to consider.

J-Tech Digital JTD4KSP0501 provides the same kind of sophisticated and anticipated output as expected from its title. It facilitates a durable plastic body on the outside with a cube-oriented design. This switcher can be considered as a mid-range option to consider because of its price but still does not lay back in any way as compared to the big guns.

The minimalistic outlook is paired with a total of 5 in 1 output which means the same conventional 5 input but 1 output design. The ports can host HDMI compatibility but something which separates it from its rivals would be the added MHL feature that can take any gadgets with MHL support for a ride which means that you can also project the screen of your smartphone or tablet to your TV with an MHL cable.

The resolutions stand at a high of 4K x 2K for HDMI output with the additional improvement of an MHL support that works with 1080p. The MHL receiver and HDMI transmitter core are reinforced with HDMI 1.4b and MHL 2.0. These specs can surely generate an output that would be adequate to support all sorts of gaming consoles and multimedia players. Another useful application would be the involvement of 3D compatibility.

It ensures optimum performance with its audio department as it supports DTS-HD/Dolby-TrueHD along with some other perks that might be enough to convince you of its effectiveness in terms of the audible sensory experience that you will be looking forward to.

J-Tech JTD4KSP0501 is surely built for someone who either does not wish to spend much on an HDMI switcher or anybody looking for something extra in terms of the MHL support that it entails.

Fosmon HD1832 is your one-stop destination for anybody on a serious budget but with its low retail, it still manages to secure the fourth place on our list. This is because of its undoubted efficiency and precision-based output. The body is formed of a hard plastic case that conceals a very linear and slim profile.

It encompasses the 5 in 1 output variant that can help you connect 5 HDMI sources with 1 output. This is elegantly embedded within the chassis of the switcher to dramatically reduce cable clutter as it is arranged in a linear fashion.

Now whereas the low price point would surely have its benefits but the cost-cutting measures by the manufacturers would also have to be taken into consideration and here it would be the highest resolution support to 1080p only. This might not be an absolute drawback unless you have a 4K TV that needs some more firepower, then you can always spend a couple of bucks more to be on the better side of things.

Some other bonus features would include gold plated ports that reduce tarnish and eliminate any room for corrosion with 3D, HD audio, and deep color support for a significantly better viewing experience along with HDCP compliance. Another plus point is that it doesn’t require any power. It directly functions from the source, which is your display.

Fosmon HD1832 should be on your list if it’s a budget-built device that you’re looking for which can get all your HDMI switching needs fulfilled.

AV Access is a worthy contender thanks to its performance and gamer-oriented aesthetics. The red and black theme etched on the plastic external layout is a satisfactory sight to witness. So, this thing can fit right into your battle station setup.

The number of ports on this device might be a bit less and below par, as compared to its other counterparts that it is being compared with but despite all these setbacks, it is a determined piece of tech that pushes out an impressive 3 in 1 output with a dedicated 4K resolution.

As previously mentioned, it boasts a high-end 4K resolution at 60 Hz which tends to compete better in terms of its price with other premium-priced models. The resolution would be the primary convincing factor as it tries to fill in the gaps of the fewer ports that have been integrated.

Not only this but it also targets other areas of the feature cap with IR wireless remote control and front panel button for improved navigation and functionality, built-in surge/lightning protector, Dolby Atmos, and DTS: X support so you can seamlessly indulge in the audio output along with some other bells and whistles.

AV Access can make up a brilliant purchase for you if you only wish to pair up a couple of devices with your display while not giving up on any of the output quality that you would come to expect from it directly.