Gaming on the go is a concept many are familiar with. After all, what do you turn to when you are out and about and your phone memory or battery gives up on you? Portability- yes, you turn to a handheld gaming console.  Most phones these days are smart, but they aren’t built for those long gaming sessions that you occasionally long for. 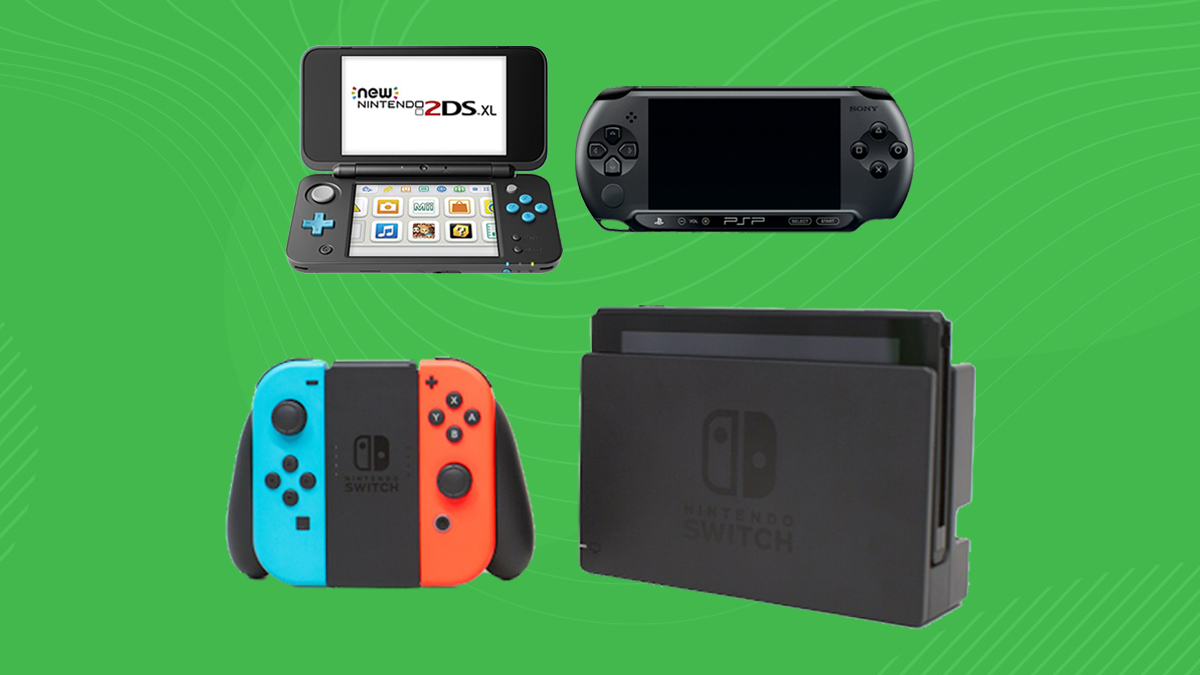 Handheld consoles are a great way to stay entertained while on the move. You need to rely on a robust system that quenches your gaming thirst there and then without letting you wait to go home and reach out for your console. A handheld gaming device does just that and then some. They have better battery life, tangible buttons, and dozens of game choices to keep you going for a long time.

Nintendo is dominating the handheld market with 4 consoles on its roster. The top player Sony does not remain the king of handheld anymore as the PlayStation Vita console was recently discontinued. Nintendo has climbed the competition ladder quickly with the Nintendo switch and undoubtedly so, has snatched the ‘king’ title from PlayStation.

The versatility of Nintendo Switch matchless as it can be used both alone and with another player on the go or, better yet at home on your big screen with an HDMI connection and the dock. With dozens of game titles available there is always something for everyone. A huge sharp 6.2-inch screen accompanied by 1280 x 720 resolution ensures HD graphics on a handheld console.

The Switch has the power to amaze both a seasoned gamer and/or those occasional time killers. Its ability to act as a portable gaming device as well as a full-fledged console provides the best of both worlds.

The basic version comes with a Switch, dock, joy-cons in a variety of colors, joy-con strap, joy-con grip, and HDMI cable as well as an AC adapter. With this assortment of elements, you can use your console in different combinations diversifying or gaming experience. When you are out and about, the controllers can be attached to both sides of the console to get a portable set up for on-the-go gaming. But the real magic happens when you are at home. Insert the console in the docking station and connect it to a monitor or a TV with an HDMI cable. The two Joy-Cons can be joined together with a special holder to give you a full-fledged controller to enjoy gaming on your big screen TV. The two Joy-Cons can be shared between two players in virtual battlefields.

The $299 price tag completely justifies the versatility and the features the Switch has to offer to audiences of every type. Whether you prefer portability or couch gaming, Nintendo Switch is the one to opt for.

If you want extreme portability and multipurpose functionality, Sony will not disappoint you with its PlayStation Vita console. The 5-inch OLED panel is big and bright with sharp colors and a high contrast ratio. With a 960 x544 resolution, it’s no way near Switch’s resolution but none-the-less does a pretty good job in displaying a wide gamut of colors, as can be said for all OLED panels. There is a touchpad located at the backside of the console that lets you control the camera viewing angle in games, quite a nifty way to control the angle without using any front buttons.

In addition to standard buttons for control, there are two joysticks on either side of the screen for more comfortable and convenient gameplay. Fond of action games? The two shift buttons on top corners can aid you in big time for all those action-packed titles on the Vita console. The volume and home buttons are cleverly located and fall right within fingers’ reach.

There is an option of a memory card in case the built-in 1GB memory does not suffice, although it is plenty to store many of your favorite games, and then some. The console is equipped with the ARM Cortex A9 quad-core processor clocked at 2 Hz. Combined with 512 MB RAM, The Vita provides ample speed and performance for any game thrown at it.

The Vita is truly a wonder as it comes with all the latest developments and a wide variety of games. More so you can enjoy full-fledged PlayStation 4 titles via a local connection when your TV is out 0of bounds.

All these features make Vita an ideal handheld device for many of us out there. Although it has been officially discontinued by Sony, it can still be bought Second hand from a variety of online marketplaces.

Coming in at 3 is Nintendo again with yet another awesome portable system, the 3DS XL. The latest iteration embodies face tracking, superior controls and face tracking, an upgraded camera, and a faster CPU. The 3DS really deserves all the attention due to its 3D screen (in case you couldn’t figure out what 3D was). The console consists of two cameras at the front to determine the viewing angle of the user. So regardless of whichever angle the console is being used at, the image (2D and 3D) projected will be sharp and crisp. Additionally, the Stereoscopic cameras on the back are a nice addition that allows great 3D photos. Each camera has a resolution of 640 x 480 and uses CMOS technology for its sensors.

The 3DS might not be a ticket to future gaming, yet it can confidently be said that it is one of the best handheld gaming systems even right now, three years after its release. Part of the credit goes to the deep-ingrained Nintendo games that are a pleasure to be accompanied by on-the-go or on the couch. It is a bit clunky yet, a kid-friendly device capable of taking some knocks and scuffs as compared to the likes of iPhone and iPad. The $129 to $199 device is compatible with many of the old Nintendo DS/DSi games, media apps like Netflix and Hulu. The 3DS also comes pre-installed with loads of software and activity tracking applications and games.

Although it may not be a hard departure from the original 3DS but has quite a few nifty tweaks to get your head-scratching to opt for the new model and frankly speaking, you should, there is plenty of features that make the XL stand out from all older siblings in the Nintendo handheld family.

Here we are with yet another Nintendo offering, this time around, it may not be a sophisticated piece of modern gaming hardware but it is none-the-less part of the Nintendo Family, the 3DS family to be precise. The 2DS is capable of doing everything that a 3DS can do apart from displaying 3D content.

The 3D apparently was not the best feature of the 3DS, and that accolade only attributed to a decent library of 3D games. But that was all. Apart from the minutiae of small ignorable updates, there was no actual need or desire for the 3D game without any glasses. Hence, the 2DS was born.

2DS’s affordable price tag is one of its greatest advantages. It plays all the games the 3DS does (minus the 3D part, obviously) and is likely to be found under $100. Now that’s 2DS for every kid in the house! The 3DS was known to trigger motion sickness with 3D images and many people were unable to perceive 3D images anyway making the 2DS was an ideal remedy for such players.

Although it’s the clunky impression at first may put you off but only when you hold it in your hands, you will notice it is fairly compact and lightweight. The 2DS is a single slab of solid matte plastic without any hinges, unlike the 3DXL. The slab form gives it more like a tablet feel which can be a good or a bad thing depending on how you look at it. I found this slab form more towards a disadvantage as the screen is more prone to scratches and dings hence it ought to be carried in a case.

In all, the Nintendo 3DS has built an enormous library of games that the 2DS can enjoy. Plus you do not want to put up with the cost of 3DS then, 2DS is an ideal option for you.

You must be thinking why this sudden retrograde flow, why even mention something outdated given the age of cloud computing and online streaming games. Well, we are talking handhelds of all time, and our list would nowhere be complete without the mention of Sony’s All-rounder in terms of performance and value.

Sony came forward in 2008 with a point upgrade on The PSP 2000 with, you guessed it, the 3000. With plenty of smaller upgrades, the PSP 3000 made a lot of modifications to the previous gen. Although the weight and dimensions remain the same, the multimedia capabilities were expanded.

The screen contrast ratio offered better brightness and a decreased pixel response time with an increased color gamut. The familiar home button was also relocated. The ‘Select’ and ‘Start’ buttons have been made fully oval instead of half oblong circles as on the PSP 2000. This gives the buttons a flush aesthetic appearance as opposed to a protruding feel in 2000. The 3000, while looks identical to the previous-gen, the overall appearance feels and looks more metallic.

The new microphone is also a welcome addition, although in my experience I found it to have a bit of an echo but does the job of letting you chat while playing. BUT, avoid using it in a noisy bus or a coffee shop, as it may not justify your communication needs adequately.

Pressing the “on” switch greets you with a familiar Sony and PSP log0 and the XMB interface, which you will notice is now more colorful owing to the high contrast ratio and better color range

While it didn’t have any internal storage it did come with a UMD drive. PSP was the first console to come up with the UMD (Universal Media Disc) developed by Sony itself. Capable of holding up to 1.8GB of data, it was a far cry from the first-gen of PSP that had only proprietary formats. The 3000, however, was a device that plays video games as well as other media including audio and video, For those who like to watch movies on a gaming device(seriously, no judging).

The UMD became ideal for those little lunchtime gaming sessions as the compact disc was ultra-small and could almost fit anywhere. The 3000 utilized 802.11b, IrDA, and USB for internet access and it also came with a web browser that was capable of multi-tab web browsing as well as playing online.

If the lack of internal storage is not a deal-breaker for you, the PSP 3000 is an ideal choice that stands out as an all-rounder when held up close with the newer PSP Go and the older PSP 2000.