In a studio environment, there are few things more important than a good high-quality microphone. When I say studio recordings, I don’t just mean the recording booth. It could be a film-making room, your own personal space for youtube, a place for podcasts, or even somewhere to stream from. 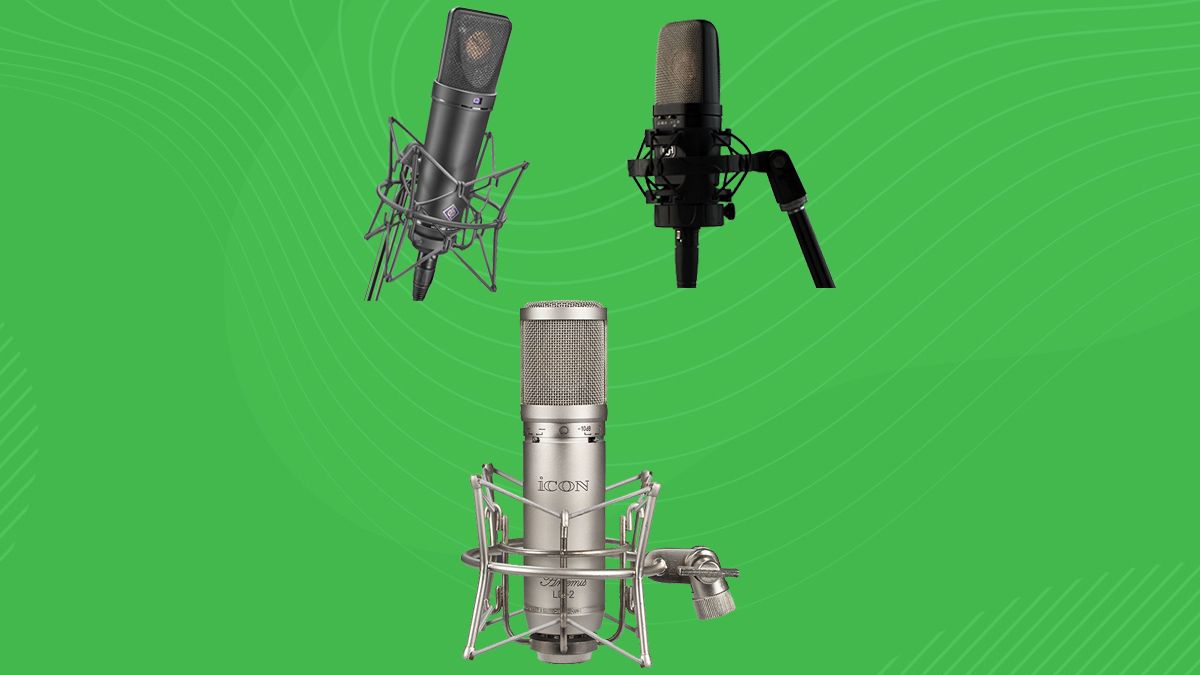 Mics can be either found in dynamic or condenser types. Dynamic microphones are great for live sessions or concerts, as they have a lower sensitivity. On the flip side, due to its high sensitivity, a condenser mic is good for recording sessions. Oh, and don’t fall for the gimmicks, high-quality internals are what make great condenser mics.

With all that out of the way, as you can probably imagine, finding a mic good for you is hard. Thankfully, we’ve narrowed down the list to make things easier for you. Let’s have a look at the best condenser microphones in 2021.

The AKG C414 is a legendary microphone that has stood the test of time over and over again. It has been used by legendary musicians and singers like Freddy Mercury, David Bowie, and many others. In fact, this microphone is hard to avoid in professional environments, so a lot of musicians even today have some experience with it. The mic even arrives in a briefcase, so you know it means business.

In that briefcase, you get a shock mount, a windscreen that serves as the noise protection filter, and the microphone itself. This C414 XLII feels heavy and is made up of extremely good quality materials. It just exudes a premium feel and you can be confident in its durability.

Let’s cut to the chase, how does it sound? More than enough to justify the steep price range, and then some. It is a great natural sounding mic, but it does have a bit of excitement to it. The best part is that it adds a bit of shine to the vocals and really brings them to life. With several polar patterns available, you can switch to anyone you want on the fly with an easy to reach slider.

While it does have all the usual 4 polar patterns, it even has options in between them for different sensitivities and pattern structure. This means it has support for 9 patterns in total. That’s really what makes the microphone extremely versatile for anything you want to use it for. It’s probably a bit overkill for the average person, but if you want the best microphone, this is it.

Coming in at a close second is none other than the prestigious Rode NT1 Cardioid microphone. This mic has seen a lot of revisions over its long life of over 20 years. This particular version uses a new capsule inside, which is quite similar to the original. However, while doing so, it gets rid of the noise reduction problems the original had. This makes one of the greatest microphones ever even better.

So what makes this mic so special? Well, it’s mostly the natural-sounding vocals. The low end is warm to the ears and the top end sounds airy. Overall, the sound produced by this mic is just exceptional. The included double-meshed pop shield also does its job as a noise filter quite well, and the shock mount is well built.

However, it’s not all about vocals. It sounds just as good with a variety of instruments as well. It sounds extremely silky on guitars, but it does struggle a bit with extremely loud instruments because it lacks a pad which would help with audio distortion if the input overloaded the circuit. However, that is an extremely rare situation.

The design is classy and very minimal, it has no switches for a pad or bass roll-off, so it has a very businesslike appearance. The only gripe I have with this mouse is that it can occasionally produce sibilance, which means in soft consonants like the letter “s”, it might produce that hiss which is common with other microphones.

However, these moments are extremely far and few between. I wouldn’t even worry about them when thinking of buying it myself, but that’s one reason why this mic is on the second spot. Apart from that, this is an easy recommendation.

I highly doubt Audiotechnica needs any sort of introduction. They have been making high-quality audio gear for a while now, and their main focus is churning out products that are too compelling of a value to pass up. The Audio Technica AT2020 is the prime example of that, but it delivers even more than it promises.

USB microphones are no doubt the most popular options these days. With the rise of podcasts and long high-quality videos on Youtube, good audio quality is important to hobbyists almost as much as it is for the professionals. So the competition might be stiff, but the AT2020 standouts in producing an up-front sound all while keeping a good depth to the quality.

It is an absolute joy to use for pure vocal recordings, especially for things like podcasts. The mic works best when speaking at it from a right angle, and the included tripod stand tilts it upward to help with that. While it works great for vocals, it doesn’t have much variety apart from that.

Sure for personal projects, it would be fine in the recording booth for instruments, but don’t expect it to blow your socks off. The only negative I can think of is the lack of a headphone input, which is a bit annoying. There is no gain control either, but this might be because some might want to configure this in their own program on the computer.

Overall, this is the best USB Condenser Mic out there, and it definitely puts a lot of other cheaper options to shame. Audiotechnica shines once again.

If you happen to be a Youtuber, I am quite positively sure that this isn’t the first time you have heard about this mic. It is used by a lot of influencers on the site, and even if you’re someone who watches a lot of Youtube videos, especially popular audio channels, you’ve probably already seen a review or two for this microphone.

It’s easy to see why it’s so popular. You just plug it into a USB port on your computer, find the right position for the microphone, and start recording. That’s really all there is to it. The audio quality is sublime for videos on the platform, and it’s even better for podcasts, where audio is obviously key.

It also looks quite appealing. I’m personally a fan of the blackout version, which looks extra stealthy. If you don’t like the silver/grey color, there are a tonne of options available including red, blue, platinum, and many others. So, it’s easy to use, sounds great and it looks good. What’s the catch?

Well when I said it’s easy to use, that could also be its own undoing. It’s great for podcasts, but in videos, you typically don’t want the microphone showing. If you don’t mind that too much then it’s fine, but this mic is so huge that it’s kind of hard to hide it from the camera. It’s also quite heavy so it’s not exactly the easiest thing in the world to mount. I wouldn’t trust this huge hefty microphone hanging over my head anyway.

Apart from that the controls and the knobs are too flimsy for a microphone at this price. Still, it is a great microphone even today, but just remember that in terms of versatility it can be a bit limited.

Best On A Budget

As I said before, due to the influence of social media and a lot of people broadcasting from their homes, professional microphones have seen a huge increase in popularity. Due to this, the competition has gotten stiff, and the prices are quite high at times. However, not everyone is willing to fork over a couple of hundred dollars for a microphone.

So if you’re the budget-conscious audio geek who doesn’t want to break the bank, the Neewer NW700 just might be the perfect pick. Have a look at the price and you already might be a bit suspicious. But trust me when I say this, you can’t find a better microphone at this price.

First off, it comes with a shock mount, an arm stand, clamping mount kit, and even a pop filter. Not even more expensive microphones have all that going for them. If you still don’t see the appeal, the sound quality is phenomenal for the price. It’s definitely not intended for the recording booth, but for podcasts, Youtube videos, personal projects, etc, this is an exceptional microphone.

Of course, you will have to lower your expectations a bit. It obviously doesn’t go toe to toe with a thousand dollar mic, but that should be obvious. It does pick up a bit of background noise, but the real caveat is that it has an XLR output, which isn’t exactly convenient for everyone. It also requires phantom power to unlock its full potential.