If you’re a sports enthusiast who has cycled on the abandoned roads of the countryside, canoed in a creek, or even went out for a run on the shore of the beach, the notion of recording your activity and the landscaped vistas must have crossed your mind a couple of times. 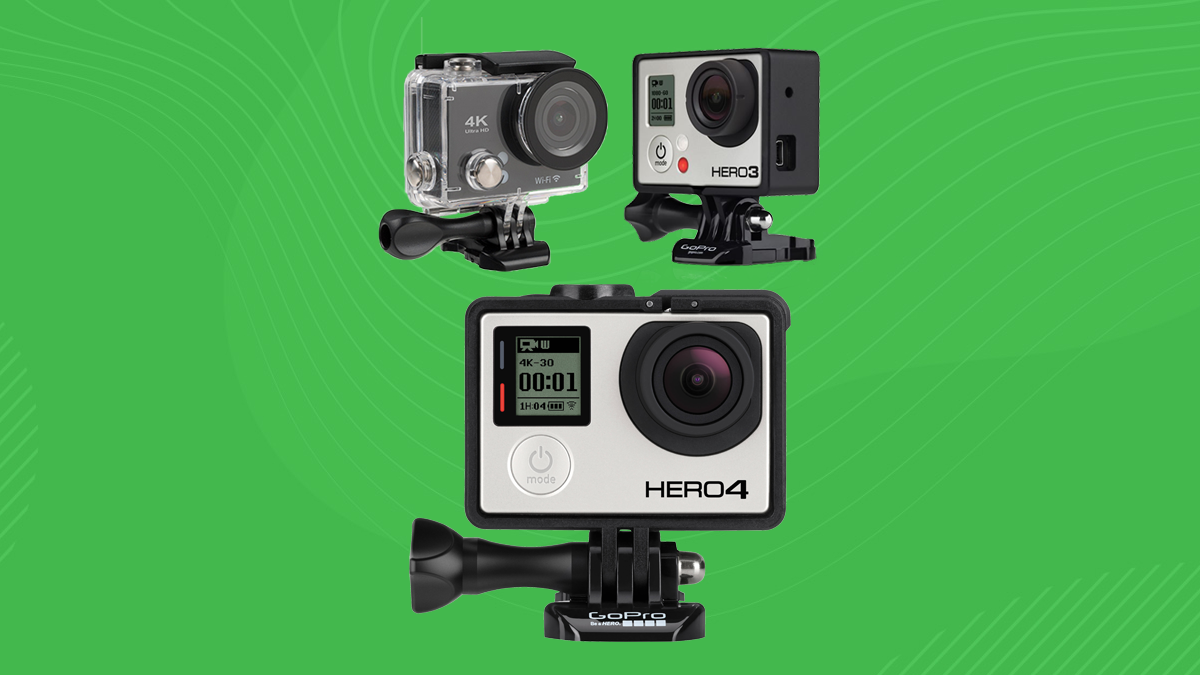 Thanks to the invention of the Action Cameras, one can archive their adventures simply by the touch of a button and strapping the camera to their helmet, arm, the handlebar of the bicycle, or anything convenient. With the features of being portable, hands-free, waterproof, and user-friendly, the action cameras are the new adored gadgets.

With a lot of Action Cameras available in the market, one is compelled to contemplate the credibility of the device and is left addled as to which camera suits their taste more. Fret not, for here, after a lot of research and experimenting with individual Action Cameras, we list the best action cameras under $100 you can buy in 2021.

Akaso has rapidly become one of the best manufacturers in the action camera industry. They focus on making great cameras for an even greater value, and the V50X is no different. With a plethora of positive reviews and user feedback, we’re confident in saying this is the best action camera out there.

It uses a Sony IMX 458 sensor with a 12MP resolution count for still photos. It has a 2 inch IPS screen, which is very responsive and has great viewing angles. You get a tonne of accessories in the box, which includes a waterproof case, two batteries, and several mounts so that you can basically set this up anywhere you want. The 1350mAH battery will give you an hour of 4K footage at 30fps. Thankfully, you can easily swap out the battery or use a power bank.

Unlike other cheaper action cameras, the V50X actually supports native 4K, not upscaled 4K. The footage looks phenomenal for an action camera under $100. They also include a waterproof case in the box, so you can take this to the pool with you without worry. The highlight in this camera is definitely the electronic image stabilization.

Sure, it’s not as good as the GoPros or other higher-end options out there, but when it comes to the price range, the EIS knocks it out of the park. The only minor flaw we could find was in the microphone. It’s useable for most people, but we expected it to be of better quality.

All in all, this is without a doubt the best action camera you can buy, and it’s worth every single penny.

If you are low on budget, Dragon Touch 4K Action Camera is the one for you. But do not be deceived by the comparatively lower price, since Dragon Touch most definitely has not compromised on either the inner circuit work or the external body. The 2-inch screen enables the users to view videos and photos recorded and captured respectively, in the most pleasing of ways.

1080P/60fps videos look smooth and sharp from this camera. However, don’t be fooled by the 4K moniker in the name, the UHD footage in this camera is just upscaled from 1080p. This camera also comes with a handy wireless wrist remote control. Want to share your moments and activities on your phone or tablet? No worries. The AXD app has you covered. The camera also comes with two batteries so power will be something you’ll be least bothered about.

The sensor itself is quite impressive. The footage looks surprisingly great for a camera this cheap. Sure, the image stabilization could have been a bit better, but that is a minor complaint. This device is sort of a jack of all trades. It’s durable, has a good sensor, and is compatible with a lot of accessories.

However, still, photos look like as you’d expect from a camera this cheap. It’s the sort of camera you can put through a lot of punishment, and if you do get good use out of it, you won’t be too mad either if you lose it or something similar. That’s why it serves as a great starter camera.

This is one of those action cameras that might slip under the radar for a lot of folks. However, you can’t dismiss the Apeman TRAWO or you’d be missing out on a lot. It makes a very strong first impression, straight from the unboxing. The packaging goes above and beyond the price-tag, and it’s almost Apple-esque. The box includes a tonne of accessories, such as clamp mounts, a waterproof case, two batteries, and much more.

The TRAWO uses a Panasonic sensor, which records 4K footage up to 30fps. For some reason, Apeman claims the 4K support can go all the way up to 50fps, but this isn’t true. The footage from this camera looks clear and sharp as day. Even at night, the footage doesn’t get too grainy, and it works perfectly fine. However, image stabilization is a bit disappointing.

The waterproof case is put together quite well, and you can dive with this camera to a depth of over 40m. Underwater, the footage looks just as good as it does on the ground. The 20MP stills from this camera are great as well.

Instead of a touchscreen, we’re stuck with buttons on this camera. It would have been a bit higher on this list but the Akaso V50x has better image stabilization. Still, it’s worth a look especially if you want to take your camera underwater.

If you are running tight on budget but still want to own an action camera, then the Crosstour is most definitely what you’re looking for. The Crosstour Action Camera is famous for being the alternative to the costly GoPro Action Cameras because it’s just as good and relevant. The 12MP and 1080P together can make sure you capture high-quality pictures and videos easily.  The 2 inch HD screen makes the whole activity a lot more enjoyable. Crosstour is 30 meters water-resistant; take notes swimmers.

What makes this action camera unique is that it has a ‘Dash Mode’ which is usually absent in most cameras. This feature allows users to record perfectly stable videos while driving. ISmart DV is the app that is associated with the Crosstour, which is available on both iOS and Android devices, this allows one to easily record videos, take photos, download/delete and view files. The camera also comes with two rechargeable 1050mAh lithium batteries that can last up to 3 hours, and a kit full of 18 multifunctional accessories. The only drawback of this beauty is that it lacks the ‘Time Lapse’ mode, but hey, do I need to remind you of the beyond belief retail price of the device? You will NOT regret buying this action camera, you have our words on this.

The EKEN H9R is so far the most underrated Action Camera in terms of popularity. With the ability to shoot videos of 4K at 25fps / 2.7K 30fps/ 1080p 60/30fps 720p/120fps, the EKEN H9R just can’t disappoint you. It captures photos up to 12 Megapixels. The device comes with built-in WiFi & HDMI output so editing and sharing your moments will be a child’s play, especially with the App EZ iCam, which has been specifically designed for this particular Action Camera.

The EKEN H9R also comes with a distinctive feature, that is, live streaming. So you can go out for a hike and your family can monitor your every move right from the living room. But unfortunately, this feature is only available on iOS devices. Also, the camera is packed with two 1050mAh batteries, giving you a long enough battery life to record your complete venture. And lastly, something that makes a product more exciting: the free accessories. I mean, who doesn’t like free stuff?  EKEN H9R comes with waterproof housing, 2.4G remote, pole mounts, tripod, USB cable, charging dock, and helmet mounts.