Audio is not frequently considered as one of the more important factors of great gaming experience. People recurrently focus more on other aspects such as the performance of their computers and their common peripherals, such as keyboards and mice etc that go along with it. 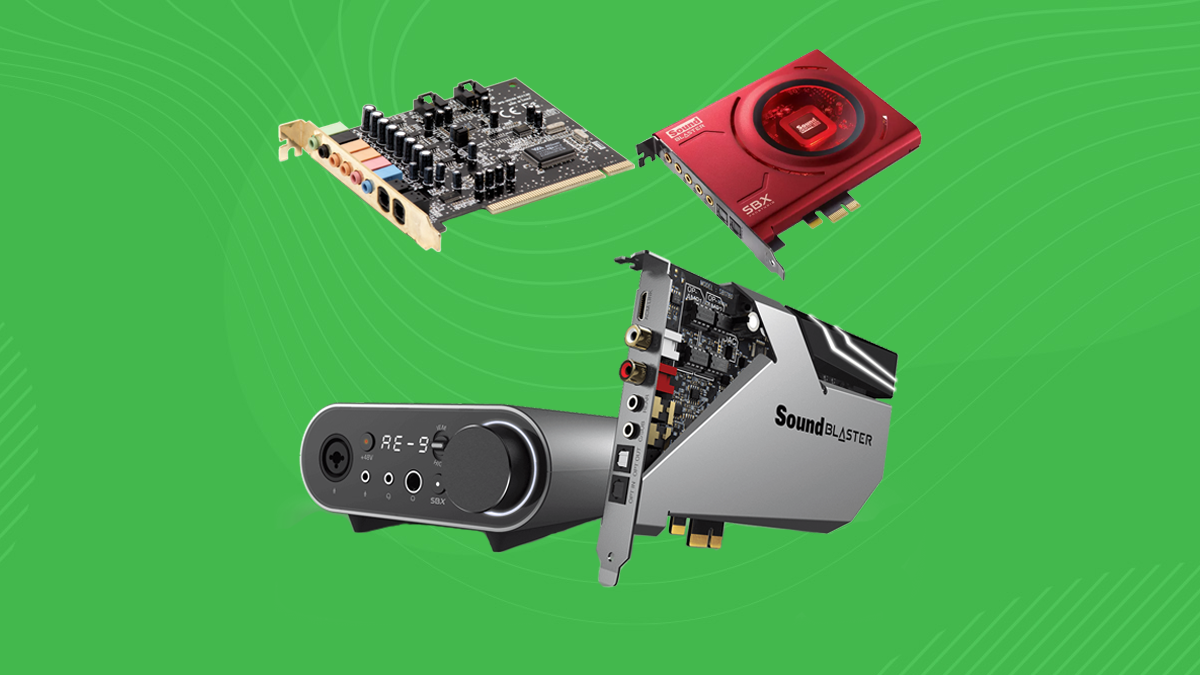 Regardless, great sound quality can be the key to an immersive gaming experience. Especially now that we have virtual surround sound in so many headphones, you might consider picking up a decent sound card to go along with it.

The Asus Xonar DSX PCI-E 7.1 lands at the top of our list with its impressive audio output. It has a slew of features for games that can really take your immersion to the next level and will make your listening experience much more enjoyable. Coming in at a relatively inexpensive price, the Asus Xonar DSX is an easy recommendation for the best sound card out there

The sound card works by simply connecting it to the PCI-E X1 slot on your motherboard which all motherboards have by default these days. The card itself is very reliable and will easily last you a long time. The card is also equipped with an amplifier which can provide signal amplification resulting in better audio from your headphones or speakers. It also has support for DTS and 24bit/192k audio so be assured that you are truly getting the Hi-Fi experience.

The sound card works great in video games and movies alike as it has 7.1 channel surround sound support which really steps up the immersion level. It sounds best with a set of high-end headphones or a great set of bookshelf speakers. It can drive demanding speakers without any issues.

Overall, this is the best sound card you can buy for the price to performance ratio. Asus’ Xonar GX2.5 audio engine brings a new level of immersion and depth to your audio. Whether it be movies or games this sound card will not disappoint with its crystal clear sound quality

If you are someone who spends most of their time playing intensive and fast-paced online shooters, then look no further than the Creative Sound Blaster Z. It is filled to the brim with specific gamer-friendly features. It can really enhance any video game title.

This sound card is equipped with 5 3.5mm audio jacks that can be used for mics or other devices. Switching from, let’s say, headphones to mics is as simple as the flick of a button. It can easily drive high impedance headphones up to 600-ohms and is equipped with a high-quality amplifier with just adds more depth to the sound.

The main reason why you should be buying this sound card is the slew of features specific to gaming. Through software, it adds two useful features. The first one they call “Alchemy” which enables EAX support on older games so no matter your title is old or new you will enjoy the experience this sound card provides. The more important feature is coined as “Z series control panel” which gives you powerful control through an equalizer, ability to adjust microphone settings, and a feature known as “scout mode” which improves high and middle frequencies which makes it easier to detect character footsteps in games.

If you are playing first-person shooters, then this is an easy recommendation as this sound card really immerses you and helps you in detecting enemy movement which is helpful in any game. The only downside that can be found is that although it does support 5.1 channel surround sound there is no support for the 7.1 channel

This sound card has support for 3D surround which really gives us a glimpse into the future of full-on audio immersion. Even though this card is dirt cheap, it rarely feels like it because it gives you almost the same audio quality as higher-end cards. While it does not have 7.1 surround sound support it does have 5.1 channel support and is still a very capable card at an inexpensive price. The sound quality is on par with competitors although you are limited to 96k 24bit audio, mind you that is still more than enough for most usage scenarios.

It has clever software integration such as smart audio routing. If you plug in a set of speakers or headphones it will automatically detect the device plugged in and adjust the audio according to that without much fiddling. It also has 3 different presets or modes which you can change on the fly to see which works best for you.

If you are on a tight budget and want to get into an immersive audio experience, then the Xonar DGX PCI-E 5.1 is a great option for a cheap price.

Creative finds another spot on our list albeit this time with a different form factor. The Soundblaster Omni is an external sound card which means rather than connecting to the PCI-E slot on your motherboard it uses a USB port on your PC.

Despite being such a small form factor, this sound card does not skimp out in the audio department. It uses the same sound core engine as their PCI-E sound cards and coupled with 5.1 virtual surround sound it has the same level of immersion as any other sound card. Another distinguishing feature is that although it has a microphone port, the sound card itself is coupled with two internal microphones which are decent enough for voice chat while playing games. It is also equipped with a volume control knob and same reliable software features seen on their PCI-E cards.  The only thing lacking is that the onboard microphones have no echo cancellation.

Creative calls this soundcard “Audiophile Grade” on their product page. Quite frankly, its hard to argue with that label. If you want the best of the best and money is not an issue then this is quite easily the best sound card that money can buy. The whole setup includes the main base card which connects via a PCI-E X1 slot and a daughter card that connects to the main card via a ribbon cable. Lastly, it also has a desktop controller module which gives you a volume knob and even more outputs for headphones and microphones.

This soundcard is equipped with so many features that it would be quite a long task listing all of them. Let’s break them down briefly anyway. First off is that it’s equipped with a lot of 3.5mm audio jacks and also includes 2 optical audio ports and two RCA ports to connect high-end microphones. It provides crystal clear microphone audio, a high-quality headphone amp with impedance up to 600-ohm. DTS and 5.1 virtual surround sound support along with device detection which automatically detects what device you have connected and enhances the audio according to that. It also has the great software integration as all their other cards and the most important feature is that it helps you pinpoint enemy movements through scout mode and virtual surround sound.

This soundcard truly does give the ultimate experience at a high price to match. However, if you feel you can take full advantage of all the given features this card provides, then this might be worth it for you.