Upgrading from their predecessors and adding more to the line of their ‘gaming GPUs’, ASUS unveils the new RTX 2070 cards. While none of the GPU frequencies have been officially listed at this point in time, we can only hope for the huge performance boost that the custom cards from Asus have always brought, along with good thermal performance.

The following additions have been revealed so far:

There are three variants of the STRIX series:

As the name suggests, the 2-fan series will be the second addition to the ASUS family.
It has a 2.5-3 slot design and non-standard power delivery (6+8pin) and will be available in the following variants: 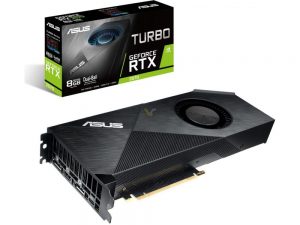 This will be a single fan card with no other variants. The TURBO will also feature RGB LEDs next to the illuminated RTX logo. It’s probably going to be a budget RTX 2070 card looking at the single fan design.

The aftermarket Nvidia RTX cards as well as the founders edition are set to potentially have a 35-45% performance boost as compared to their previous generation GTX 1070 versions. These RTX cards will also have 6 Giga Ray/s of real-time ray tracing performance. The RTX 2070 is slated for release sometime in late October, so we will definitely see the cards from Asus come out after that. No pricing has been announced as of yet.