The Asus ROG Phone has been revealed to the public at Computex 2018 and while the specifications of the device are pretty high-end, it seems that Asus had even bigger plans for the device. According to reports Asus ROG Phone was supposed to come with 10 GB RAM but there were packaging issues and the modules could not be placed.

While the 10 GB RAM would be cool and way overkill, the mobile device has pretty high-end specifications. Furthermore, DRAM prices are pretty high and I am sure that if the phone came with 10 GB RAM then it would add to the cost. The phone’s 6-inch, 18:9 display runs at 90Hz, which will be great for gaming. Other than that the phone can be configured with up to 8 GB of RAM, which might not be as much as 20 but is still plenty. 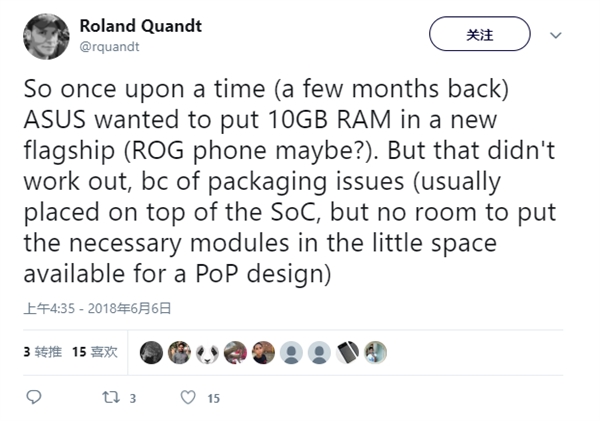 Furthermore, you get a 4,000mAh battery, 12+8-megapixel rear dual cameras, ARCore support and Gaming HDR support. Out of the box, you get a fan that you can clip on the device in order to keep in cool when gaming. The phone also comes with a vapor chamber cooling solution that we have seen in high-end graphics cards like the GTX 1080.

There are a couple of accessories that you can add on in order to make the gaming experience even better. There is a dull screen dock that allows you to play with 2 screens and comes with physical buttons that you could get on a traditional controller. Physical buttons are always better as compared to virtual ones when it comes to gaming.

You can also get joycon controllers that connect to either side of the device and you get a Nintendo Switch kind experience. There is another dock that allows you to plug in the Asus ROG Phone to an external display. You can also plug in a mouse and keyboard as well. Gaming smartphones are now becoming a thing and it will be interesting to see what other smartphone makers introduce.

Let us know what you think about the Asus ROG Phone and whether or not this is something that you are interested in getting.