Apple recently updated their MacBook lineup with the latest 8th gen Intel processors and a host of new upgrades, like they do every year. There used to be a lot of hype around the release of new MacBooks, but it wasn’t that loud this year. Even though Apple has made some considerable upgrades, like having the fastest SSD in a laptop ever seen, as confirmed in a benchmark performed by LaptopMag. There was something else that caught people’s eye. 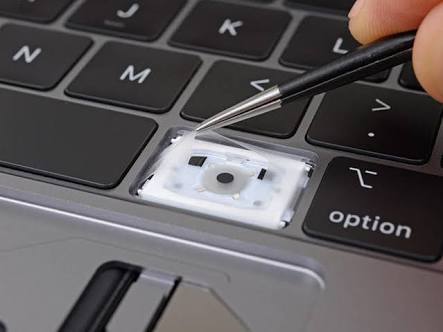 Apple along with new features and hardware also briefly included a line about the MacBook having a improved 3rd generation butterfly keyboard in the press release. This would seem like good news, but isn’t. You see, MacBooks have had significant keyboard problems in their earlier release, the keys would eventually get unresponsive and stuck due to the accumulation of dust. Several people had filed lawsuits against the company, prompting them to launch a free Keyboard Repair program in June.

Talking to Cnet, Apple confirmed that the new keys didn’t address the unresponsive keyboard issue and instead focused on being quieter. But iFixIt, known for it’s detailed teardowns, recently took apart the MacBook Pro just to check out Apple’s new keyboard. It was found out that the key switches on the keyboard were just covered by a thin, silicon layer between the keycap and the underlying butterfly switch mechanism. iFixIt in it’s teardown even stated that the new keys were a silent cover up by Apple, for it’s keyboard reliability issues.

Clearly Apple didn’t want to announce the apparent fix for the dust issue because that would mean, they will have to admit that the keys in the earlier iterations of the MacBook were faulty to begin with.

MacBooks are a favorite among professionals, due to their excellent hardware and software package, but they come at a premium price tag as well, so crucial problems like this shouldn’t be a thing. iFixIt also stated in their article that they will conduct further tests in the coming weeks to find out if this new keyboard mechanism is a feature or just a silent fix.