Apple’s value has dropped below $2 trillion for the first time since 2021 due to today’s approximately 4% decline in its share price. Apple’s stock is trading at its lowest since June 2021 as worries grow about iPhone supply shortages in China and waning consumer interest in the company’s goods due to continuously rising inflation and an impending recession. 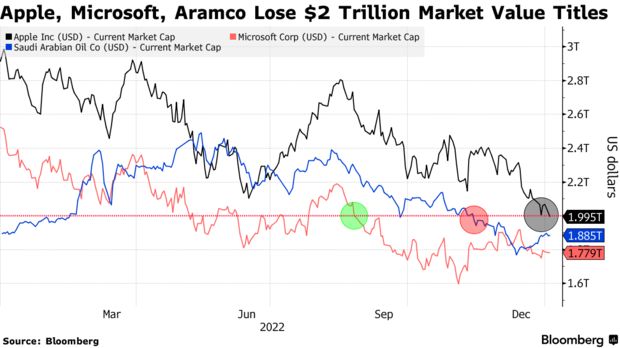 While there has been a general decline in the stock market, the Financial Times reported today that Apple had performed better than some of its competitors, shedding 27% of its value over the previous year compared to a 33% drop for the Nasdaq Composite as a whole. Apple has recorded growth for 14 straight quarters, but it is predicted that the business will see a 1% sales decline in the fourth quarter of 2022.

Over the last several months, worker shortages and workplace protests tied to COVID-19 have limited Apple’s manufacturing partner Foxconn’s ability to produce iPhones, which has caused shipment delays for the iPhone 14 Pro and iPhone 14 Pro Max. However, Foxconn said that as of December 30, its primary iPhone production in Zhengzhou, China, was running at 90% of its peak capacity, suggesting that things are improving.

In response to diminishing demand, according to a report in Nikkei Asia on Monday, Apple informed multiple suppliers to produce fewer parts for AirPods, the Apple Watch, and MacBooks in the first quarter of 2023. According to research released this week by Jeff Pu, an analyst at Hong Kong investment company Haitong International Securities, shipments of each of those items and the iPhone are expected to fall year over year in 2023.

Following a spike in demand for its goods in 2020 and 2021 due to the COVID-19 epidemic, Apple temporarily reached $3 trillion in revenue in January 2022. As more individuals worked, studied, and interacted with others online from their homes, Apple devices were in great demand.

In the following weeks, Apple is anticipated to release its most recent quarterly financial report. Its greatest sales quarter of the year is from October through December, and experts had predicted record-breaking revenue which may be a good news for the company.