According to the ASRock AB350M Pro4 motherboard’s compatibility list, there are some new chips coming out soon and you can check out the complete list below. 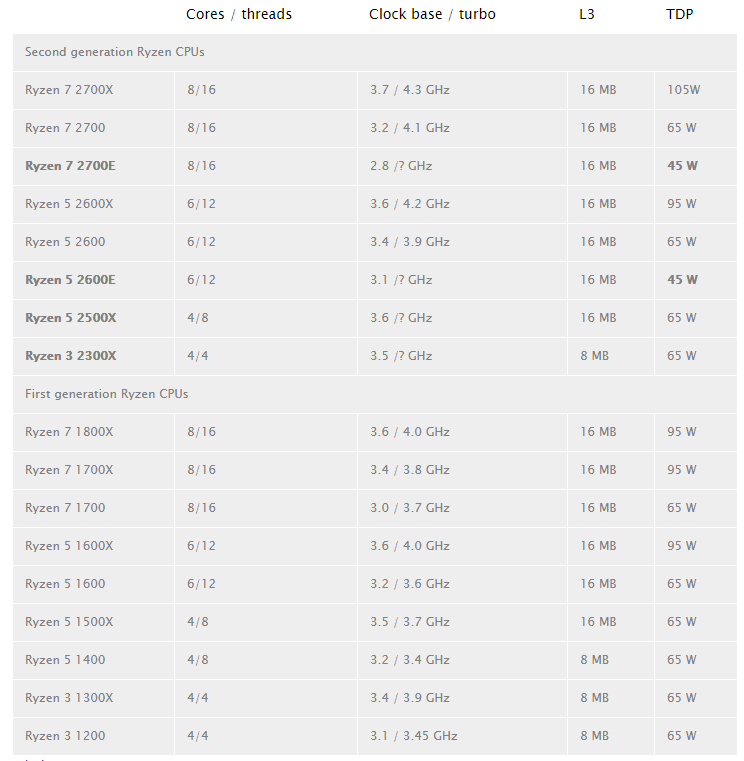 According to the table, the AMD Ryzen 2700E will come with 8 cores and 16 threads. The chips will feature a TDP of 45W. While we do not have the boost clock of the CPU the base clock is 2.8 GHz. Looking at the lower clock speed and the lower TDP it would seem that these chips are meant to be more efficient than the ones that we already have on the market. This could be coming out for the mobile market but we are not sure about that yet.

We have already seen the 2600H in recent leaks and here we have the 2600E as well. These chips come with 6 cores and 12 threads.  Other than that we can see that there are some entry-level and mid-range chips coming out as well. The 2500X comes with 4 cores and 8 threads which is plenty for gaming. The CPU comes with a base clock of 3.6 GHz. This is an X CPU which means that XFR is supported.

If you have a decent cooling solution then the chip will overclock itself accordingly. Liquid coolers will be able to overclock much higher than air coolers, in most cases. This is something to take into account if you are interested in getting an AMD Ryzen 2000 series CPU. AMD Ryzen has come a long way and still offers more cores and threads as compared to Intel, in the mainstream series of CPUs. AMD offers great value per core as compared to the competition.

Let us know what you think about these upcoming AMD Ryzen 2000 series CPUs and whether or not this is something that you are interested in getting.