Intel‘s next-gen family of desktop processors along with its first ever lineup of discrete mainstream GPUs is right around the corner. After multiple delays and shortcomings, things are finally shaping up for what is looking like an explosive second half of 2022. Intel, AMD, and NVIDIA are all set to grace the big stage and show off the biggest and best they’ve been working on later this year.

Intel will launch its 13th Gen Core series desktop processors, aka Raptor Lake, this year. Not only that, but Arc A-Series will also finally materialize in the form of a few desktop GPUs. We’ve already seen tons upon tons of leaks, reports, and rumors surrounding Arc due to its extended cooking time in the oven. At this point, we know potentially everything about these GPUs, including estimates on price and availability.

Today’s leaks add to the long list of reports and it comes directly from UserBenchmark. Leaker TUM_APISAK managed to spot two entries on the UserBenchmark database that are supposedly two upcoming flagship components from Intel. The Core i9-13900K desktop CPU, and the Arc A770 graphics card, both top-end SKUs that are launching very soon. First, let’s go over that 13900K.

The UserBenchmark listing actually doesn’t explicitly say that we’re looking at a 13900K, rather just a Raptor Lake CPU. That being said, the specs in the listing line up perfectly with the leaked specs of the i9-13900K and that’s how we know identify it as such. As you can guess, the Core i9-13900K is the successor to the current-gen i9-12900K.

The CPU will feature 24-cores and 32-threads, eight of those being P-Cores (Performance) while the other sixteen being E-Cores (Efficiency). Thanks to, once again, previous rumors we know that Intel will be packing 68MB of “Game” (aka L3) Cache into the 13900K. Moreover, the clock speeds in this listing read 2.4Ghz base and 4.6Ghz boost, a far cry from the earlier leaks which point towards a 5.8Ghz maximum boost clock, confirming that we’re looking at an early engineering sample.

Moving on to the actual benchmark, the i9-13900K actually outperformed the i9-12900K in both the multi-core and single-core tests. That is to be expected considering how it has more cores and threads, but lower clock speeds and the fact that this is an early sample should’ve suppressed the 13900K’s single-core scores. So if this test is any indication of the final product, you can imagine how good the end result would be. 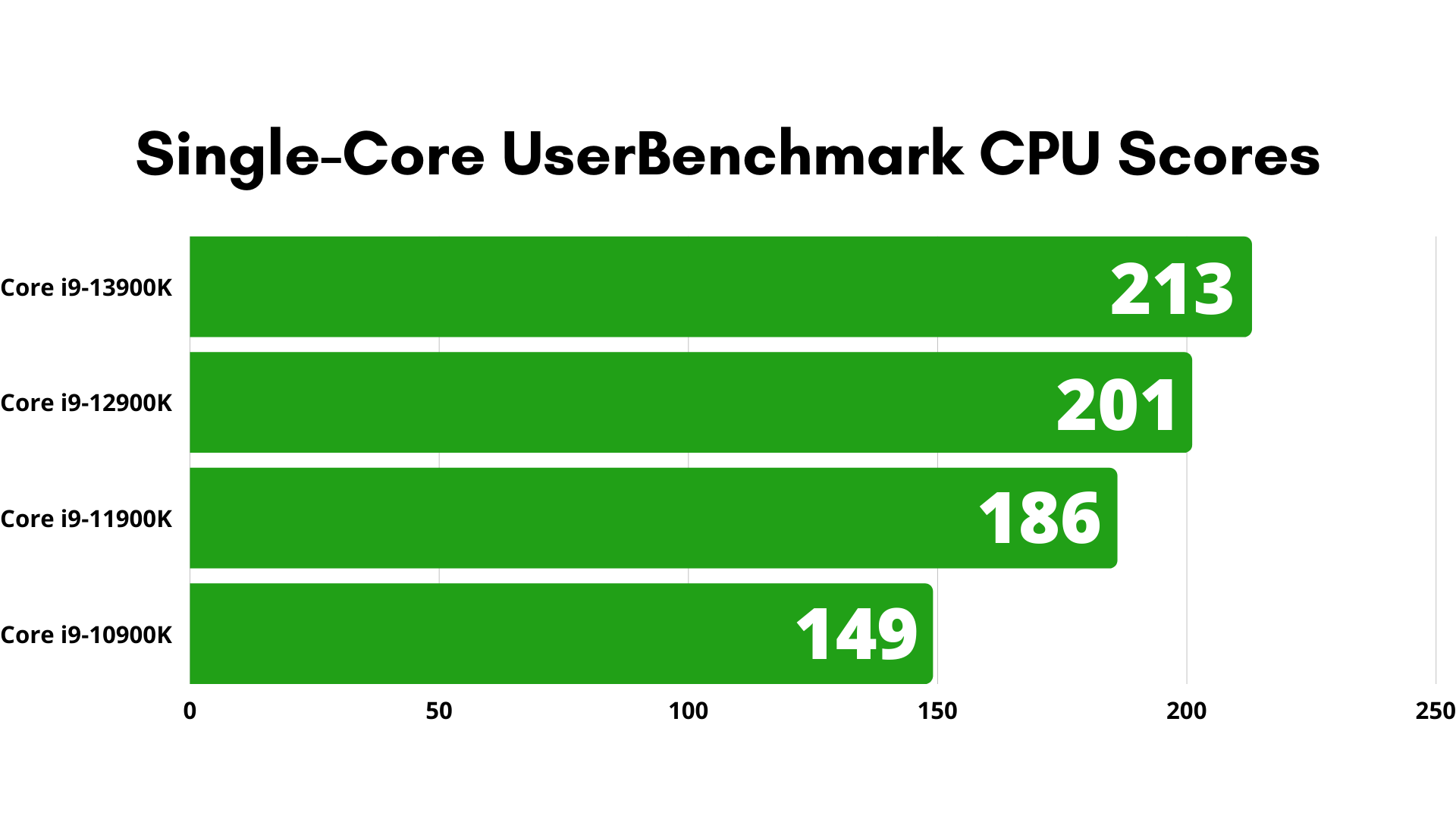 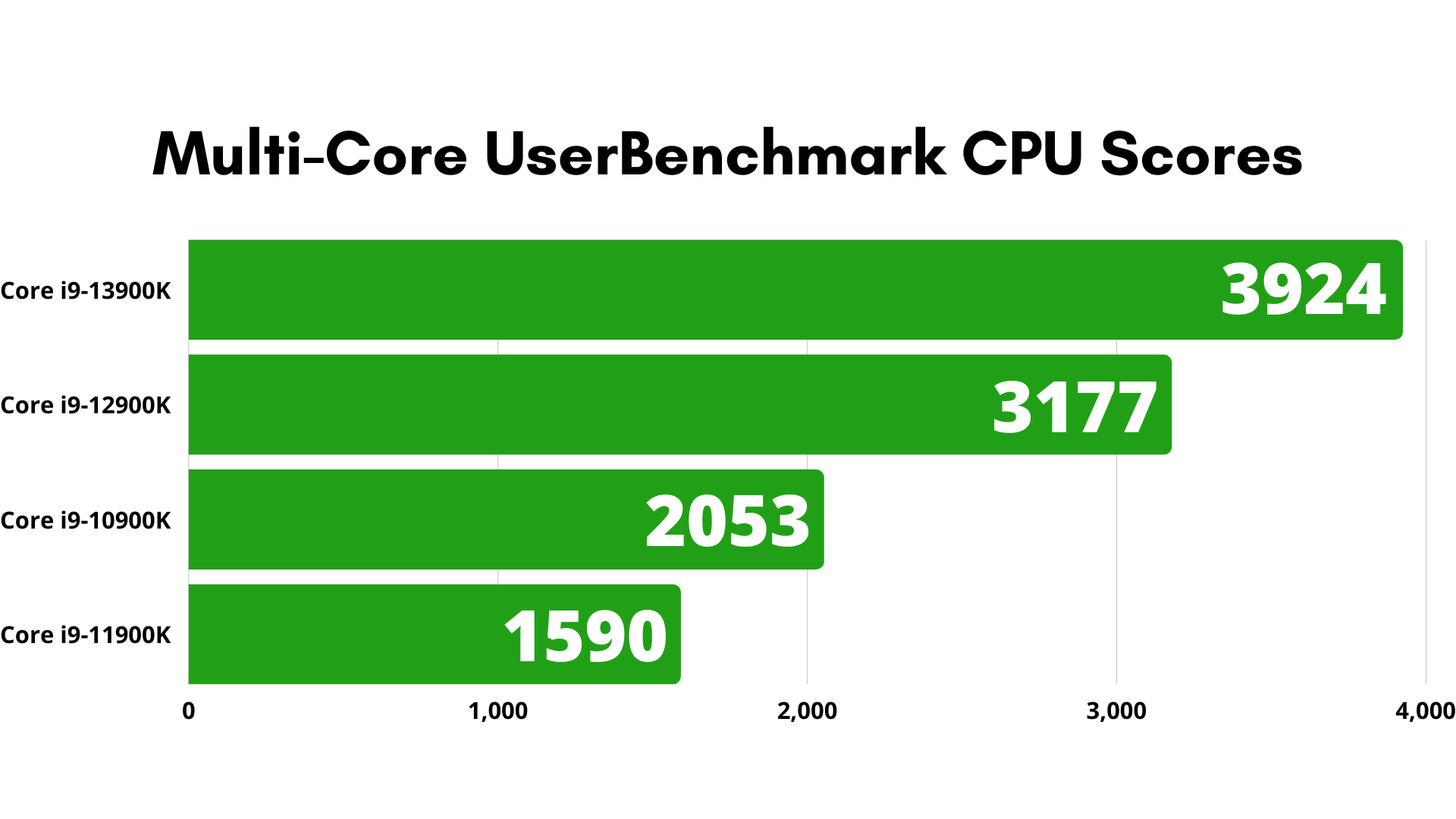 As you can see in the benchmarks above, the Core i9-13900K beats its predecessor by a narrow 6% in single-core tests scoring 213 points, but nets a formidable 24% lead over the 12900K in multi-threaded performance with 3924 points. These numbers are quite the feat for a product that hasn’t even reached its maximum potential yet. On the other hand, however, the GPU side of things isn’t looking nearly as elegant for Intel.

The test bench running this 13900K sample also had the flagship Arc A-Series GPU connected to it. The Arc A770, Intel’s answer to NVIDIA’s RTX 3060 and 3070 lineup, is set to debut this fall. The card is using the ACM-G10 GPU and features up to 32 Xe-Cores, 4096 ALUs, and maximum boost clocks of up to 2.4Ghz out of the box. As per current rumors, we expect the GPU to launch in both 8GB and 16GB variants, with GDDR6 memory.

Some of you may already know by now that Intel isn’t having the best of luck with its Arc Alchemist GPUs. Arc A-Series for laptops has had a terrible launch and global availability is still foggy. Arc desktop graphics cards have been subjected to numerous delays due to unsatisfactory performance and countless driver-level issues. Unfortunately, it seems like that still is the case as of now because the drivers for Arc A770 are not ready.

The UserBenchmark listing shows the Arc A770 as “Terrible” as it didn’t even manage to squeeze in 10 FPS in the DirectX 9 test and only around 3 FPS in the DirectX10 test. This clearly indicates that there is still a lot of work that needs to be done before this GPU can actually be tested, for real. For now, let’s just hope that it’s ready to go sooner rather than later.

As always, I have to put in the obligatory disclaimer of taking the aforementioned numbers into account with a pinch of salt. Not only are they still technically rumors and leaks, UserBenchmark is a notoriously biased platform that has been brought into the spotlight for favoring Intel and NVIDIA over AMD countless times. Still, we can leverage it as a source of objective hardware information, as in this case.

That’s why the benchmark comparisons above are against Intel CPUs only with scores sourced from UserBenchmark, so there is as little bias as possible. With all that being said, we won’t have to wait long before the products launch and we get to see the actual performance of these components, tested in a real-world environment. Till then, this is the best we’ve got.